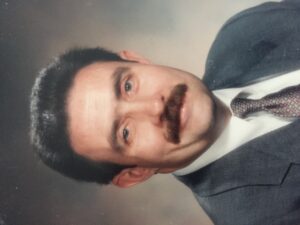 Dennis Armstrong passed away at the age of 71.

Dennis was born to Ray and Beatrice Armstrong in 1949. He grew up in Ortonville, MI. He left to serve in the U.S. Army, and served a year in Vietnam. When he returned, he met and married Susan Blessing, and together they raised two children, Kimberly and Nicole.

Dennis learned electronic and mechanical skills in the army, and he was able to build those skills into a career in engineering. Dennis was a gifted engineer. He worked in technology building and balancing machines of all types, much of which was for the auto industry. He kept machines in his workplaces running smoothly, and he invented ways for machines to work better including securing a patent in his job at Xerox.  In his spare time he did wood work, worked on electronics, and rebuilt automobiles. He always had projects in motion.

Dennis had a great admiration for automobiles. In his spare time he rebuilt a Volkswagen Beetle and a Ford truck on his own, both of which he drove for several years after. The only sport he would watch was car racing, and later in life he took annual trips to Talladega for NASCAR.

Dennis Armstrong’s kindness and generosity touched everyone in his life. He was always willing to go out of his way to help his coworkers, and was appreciated for his technical know-how as well as his good nature. At home he fixed everything that needed fixing, he put a lot of effort into remodeling the family home, and he always made sure the family’s cars were gassed up, snow and ice cleared off, and the cars warmed up before anyone left for the day.

Dennis and family lived in Dexter, MI for many years. He worked at Balance Technology and Xerox. He took a break from engineering to pursue real estate full time for a few years, and then returned to Balance Technology. He also lived in St. Louis and worked at Federal Mogul. His jobs took him to many places in the United States and to other countries: Brazil, the United Kingdom, China, Canada, and Mexico.

After retiring he returned to Ortonville, MI, the place where he felt most at home.  Dennis is survived by his two children Kimberly Scotch and Nicole Visosky, and two grandchildren, Claire and Allison Visosky. He is loved and missed by many friends and family.