A John Muir Trail adventure, ‘it’s all about the journey’

By David Fleet
Editor
Dennis Stedman has a bucket list.
Despite a hip-replacement about 10 years ago, the 73-year-old Brandon Township resident, local basketball coach and retired Chrysler engineer has 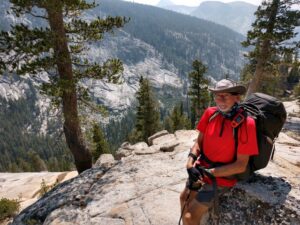 has continued to keep his deep passion for hiking on top of that list.
“I started hiking when I was 22 years old,” said Stedman. “It’s all about the journey and getting closer to God. There’s billions of stars in the absolute darkness out there—I walk away with peace.”
In August Stedman’s hiking quest to check off a bucket list item, find solace in the wilderness and further a life long need to explore what’s just over the next mountain took a slightly different path.
“The John Muir Trail was my dream hike,” he said.

“But the chances of getting to make that hike is very low since a John Muir Trail permit is issued via a lottery system. I had been waiting for years.”
However, due to the coronavirus pandemic causing a lack of travel for many hikers, Steadman was notified of an opening.
“I had about a 2 percent chance of getting a JMT permit,” he said. “So when it came through, I had two weeks to prepare and I was ready to go.”
Stedman’s desired trek on the famous California trail poses several challenges including altitude, weather and rugged terrain. The trail starts in Yosemite National Park, and continues 215 miles through the Ansel Adams Wilderness, Sequoia National Park, Kings Canyon National Park, and ends at the highest peak in continental United States, Mount Whitney at 14,496 feet.
Joining Stedman for the first eight days of the hike was his daughter Savannah.
“We carried packs of about 35 pounds and after starting in Yosemite with some very nice weather it was a good hike,” he said.
Since much of the western United States were burning this past summer, on day three Stedman recalls the first smell of smoke in the air near the Reds Meadow area.
“We could see helicopters flying over with water to put on the area fires,” he said. “I started struggling with altitude sickness too—we were at about 9,000 feet so it was pretty tough going. The trail would go up to 12,000 then down to 8,000 feet.”
Savannah left her father for home and he continued on the hike toward the conclusion at Mt. Whitney. Due to the remoteness and distance of the trial periodic supply stops are necessary.
“By day 13, I was feeling pretty good,” he said. “Then one step changed all that.”
Stedman stepped wrong, then slipped down, jabbing his knee on a sharp granite rock that cut a three inch long gash.
“I could see the exposed bone and tendon,” he recalled. “I thought—this ain’t good.”
Stedman tried to clean up the wound to prevent infection and covered it with some of the duct tape he carried. Infection was also a concern, not to mention the steep trails, the elevation and a lack of communications.
“I’m also about six days from Mt Whitney,” he said. “I was really feeling pretty positive until that point. I had to keep moving—the nights were cold too so staying warm was an added factor.”
His fortunes soon changed.
As Stedman limped on down the remote California trail a cowboy appeared just ahead.
“He looked the part too—dusty hat, dirty cowboy boots, jeans and horse harnesses around his neck,” he said. “His name was Sam—Cowboy Sam.”
Sam was leading a group of JMT horse riders that were camped nearby.
“One of the riders at camp just happened to be an internal surgeon and carried a mini triage kit with him,” he said. “Of all places to just happen to find a doctor.”
The doctor carried iodine to clean the wound, and while no sutures were available closed the gash with Steri-Strips.
“The doctor suggested strongly that I forgo the remaining six days of hiking and get off the trial at Bishop Pass,” he said. “If I was to keep going and infection sets in there is only an air lift to get me out. But I kept going.”
Miles down the trail Stedman’s knee was swollen and painful.
“About a day later, I just happened to see Cowboy Sam again on the trail with pack mules,” he said. “He tipped his dusty hat back and took one look at my knee and said, ‘You know that ain’t no scratch there.’”
He was right.
Stedman ended his trek about two days later at Bishop—short of the quest to complete the trail at Mt. Whitney. He received a ride into town and was treated at a local hospital with antibiotics. There was no permanent damage to his knee.
“I was bummed I did not make it,” he said. “But the salvation was in the hike down off the trail to Bishop—I passed amazing glaciers with water running from them and the Dusy Basin with a lake where fish are jumping—experiences I would never have encountered. The cowboy and the doctor where my trail angels and a part of my adventure. It’s really all about the journey.”
Stedman has since healed and is planning a hike to the Shenandoah Valley in Western Virginia.