A second run in Boston 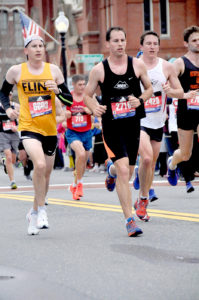 start of the Boston Marathon.
Monday marked nine years since Goodrich resident Leah Foley made that climb—just six miles from the end of the iconic marathon.
“I don’t remember Heartbreak Hill as being so hard,” said Leah, 42, reflecting on her 2010 Boston Marathon..
Leah, completed the 26.2 mile race in 3:11:48 at 7:19 per mile and 4,700th of 26,632 runners. She was 524th of 11,970 women runners.
“The crowds were fantastic and always so encouraging,” she said.
“The locals are happy to have the runners in town and they show it every mile of the race.”

A spring marathon like Boston is difficult especially living in Michigan, said Leah.
“It’s dark out and the weather often includes snow,” she said. “So training is a challenge the winter months in Michigan.”
Husband Leo, 37, finished the marathon in 2:38:37 at a blistering 6:03 per mile good for a remarkable 302nd of 26,632 runners. He was 280th of 14,662 men runners.
“This was my 24th marathon which includes two Boston (Marathon) races,” said Leo on Tuesday after the race. “The key to my success was applying all the experience I’ve learned over my years of running. Honestly, I was not in the best shape of my life this time—I’ve had some injuries. But, I did not go out of the start too fast and stayed consistent during the race.”
Leo completed the 2010 Boston Marathon.
“Heartbreak Hill was tough—actually the last eight of the race were very difficult,” he said. “I really had to pushed to maintain (my pace). The weather was not a big factor although it did get warm at the end (of the race), about 64 degrees.”
Leo, who was joined in the Boston Marathon with brothers Dan and Joe, admits it’s difficult to hold back in the early miles of a big race.
“You’re going need that energy later in the race—that’s certain,” he said. “I was very happy with the time. I encourage runners to just get out there and keep going. It’s not easy sometimes getting up at 5 a.m. and heading out the door in the cold. But it pays off in the long run.”