After 53 years Fr. Frawley to retire

By David Fleet
Editor
Brandon Twp.- From a 75-acre dairy farm in the rolling countryside County Limerick Ireland, to the plains of East Africa to St. Anne in Ortonville, Rev. Gerard Frawley’s half century pastoral journey which he describes as a “full measure of divine intervention” will come to a conclusion. 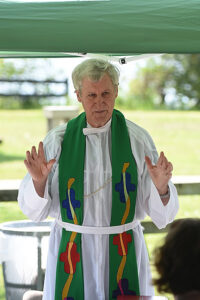 “I’d finished high school and in my teenage years and I prayed not to become a priest,” laughed Frawley, 80. “And look at me now. God obviously had a big say in this, I can’t explain it. There are far better people than me to be a priest. When this call came through in some kind of mysterious way I fought it because I could never become a good priest. I still believe that.”
At 6 p.m., Aug. 28, St. Anne Parish, 825 S. Ortonville Road, will host a potluck retirement gathering for Frawley. Also, following the 8:30 a.m. and 10:30 a.m. masses, Aug. 29 the Knights of Columbus will host a complete breakfast with proceeds going to the Pallottine Mission.
“I did not tell anyone for a good while, because I wanted to make this decision myself,” he said. “I had been thinking about it for a good while, I had fought it for a good while too and I came to the conclusion that there was no point in fighting God any longer. So I just gave in. Everyone was surprised that I became a priest as a matter of fact some people were even shocked.”
Frawley left his Irish home at about 20-years-old. He entered the Pallottine Order in 1961 and studied for the priesthood at the Pallottine House of Study in Thurles, Ireland.He was ordained a priest on June 8, 1968 and began his ministry as a missionary, serving in parishes in the Diocese of Singida in Tanzania, East Africa, from 1968 to 1972.
“The priesthood gave me inner-peace,” he said. “Becoming a priest has brought me a peace of mind that I cannot put into words. You can’t have inner-peace all the time, rather there are situations in life that can disturb you—so I ask God everyday for that gift.”
In 1972, he was transferred to England, where he ministered in two Pallottine-run parishes, St. Thomas More Parish in Barking, Essex and Our Lady of the Visitation Parish in Greenford, Middlesex.
In 1976, Frawley was assigned to a parish ministry in the United States where he served at Sacred Heart Parish in Ely, Nev., from 1976 to 1979, and St. Philip Parish in Idalou, Texas, from 1979 to 1985.
He spent from 1985 to 1990 at St. Brendan Parish in Stephenville, in the Diocese of Fort Worth, Texas.
He came to the Archdiocese of Detroit in 1990, serving as pastor at St. Joseph Parish in Wyandotte until 2000 and St. John the Evangelist Parish in Capac from 2000 to 2007. Frawley was assigned pastor of St. Christopher Parish in Detroit and was appointed pastor of St. Anne Parish in Ortonville in June 2008.
“If I was asked my greatest memory of the past 50 years, it would be all the great people I’ve met along the way, no matter where I was, Africa, England or Nevada,” he said. “And the goodness and generosity of people too of course.”
In early September, Frawley will be returning to Ireland for six weeks to visit family, before moving to the Pallottine House in Wyandotte where he will reside.
“There have been times I’ve struggled in life and times I’ve experienced some crosses too —but I never had any regrets about my calling,” he said.
“Now, I’m looking forward to retirement but I know I will miss this community very much because I’ve been a part of it for more than 13 years. Ortonville is a small community, we only have 600-700 families here at St. Anne, we get to know each other and have become very close. This is a very generous, caring and kind community and when there’s a cause or a need people here respond well and generously.”
“I’m the type of guy that takes one day at a time,” he said. “I thank God for today and know all will work out. The key to retirement is your health, and God has given me good health to this point.”
“The Ortonville area is the most beautiful area I’ve ever lived in and this is the longest I’ve ever been in a parish,” he said. “I love being in the county, since I was born and raised in the country, yet the most important part is the people—I’ll will miss everyone.”

2 Responses to "After 53 years Fr. Frawley to retire"