After four decades she retires—again 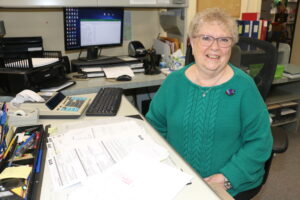 “When I retired, that was in 2010, the recession had caught up with the township,” said McArthur, a life-long Brandon Township resident. “If I had stayed full time, someone else in our department would have had to go, and by that point I had over 30 years under my belt. So the full time position could stay for that person, and I went to part time. Bob had already retired by then.”
McArthur worked in the clerk’s office for 46 years, has worked with five different clerks. Her husband, Bob McArthur, was Brandon Township Fire Chief and with the department for 33 years. Her mother also served as clerk in both the township and the village.
“I started in 1975 as the deputy clerk, but I was not in the office full time,” said McArthur. “Being the deputy for Edna Burton, that was all election stuff.”

She served as the deputy clerk for five years before she started in the office full time in 1980, still working with Edna Burton, who had been a friend of hers.
At the time, there wasn’t an office and the elected officials worked out of their homes.
“Edna, who was the clerk that I worked for, she started out as the building department clerk, and she was the only person who had office hours then. After she got elected, the officials started wanting to have offices, but they weren’t full time. It was usually after normal work hours,” she said. “I went to school for bookkeeping, so I liked doing that anyways. And I knew Edna well before, and then once I got there, I liked all the people.”
McArthur even ran for clerk in 1992 following Burton’s retirement, after having promised Burton she would run.
“I really didn’t want to do the job of going to the board meetings,” she said. “I lost by like 21 votes. Many times I’ve been so thankful I never became clerk. My natural hair color is red and there’s a temper that goes with that, I couldn’t imagine getting mad at one of those meetings and saying something out of anger.”
McArthur continued to work full time in the clerk’s office until 2010 when she retired, but promised to stay on and help part time.
“I was bookkeeper, and I love the numbers part,” she said. “And I love the elections stuff, everything about it except politics. I love knowing how the process works and how secure it is. I think it’s very interesting.”
This past election cycle, though, is part of the reason she decided to finally retire fully.
“There were a lot of changes to elections in 2018, and the 2020 election was the first time we really saw those changes taking place,” she said. “I’ll be 75 this year, and last year’s election was tough. I’ve never gone through one of those like that before, it was a lot of hours and a lot of time. It was just time for me to go. I need to spend more time at home.”
She had promised to stay on until the clerk’s office found a new person to hire, and since this is not a big election year, she figured it would be a nice quiet year for someone new to learn the job.
“It was great working with everyone,” she said of the community she served for so long. She said her favorite part of the job was the people.
“We’re going to do more camping, do a little more travel, and hopefully spend more time with family,” she said.