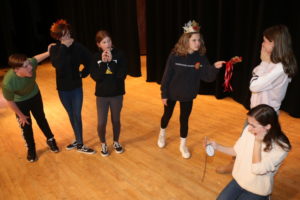 On Dec. 6-7, the middle school theatre department will present a production of Alice in Wonderland Jr., directed by Brittany Miller and Kristen Kelsey.
“It had the most parts for the most kids to let the most amount of kids shine,” said Miller. “With cast and crew, there are around 85 kids.”
Alice in Wonderland is the story of Alice, who suddenly finds herself in a land of the absurd, chasing the white rabbit that led her there. Along the way she befriends a cast of absurd characters, the Mad Hatter, the March Hare, the caterpillar, and finds herself at the mercy of the Red Queen, who declares that Alice be put to death. The story is narrated by the three Cheshire cats.
“There’s a scene with sea creatures and dodo birds, and I just love it,” said Miller. “They’re so funny, and they light up the entire set.”
See Alice in Wonderland Jr. at the Brandon High School Performing Arts Center, Dec. 6-7 at 7 p.m. Doors open at 6:15 p.m. and tickets are $5/person at the door.