By David Fleet
Editor
Atlas Twp.-She’s back.
Township resident Genavieve Linkowski will appear for a second time on American Idol. 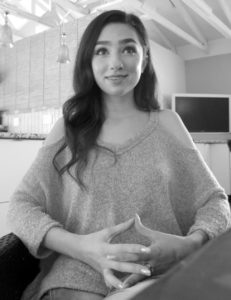 After falling just short in the competition about two years ago—ABC producers requested an encore performance airs at 8 p.m. Sunday on ABC.
In April 2018, after wowing celebrity judges Lionel Richie, Katy Perry, and Luke Bryan in prime time on ABC “American Idol” Linkowski bid to make the top 70 contestants fell short.
“The judges are the same the second time around,” said Linkowski. “This time I’m a lot more prepared. It’s not something I knew I would do again,” said Linkowski, following the announcement last month. “But I got a call, I prayed over it, I thought about it, I talked to my parents and I talked to a lot of people. I came to the conclusion that American Idol will be another opportunity for God’s light to shine and for my sister’s light to shine and for me to share my story. If I get to do that, I’m all in.”