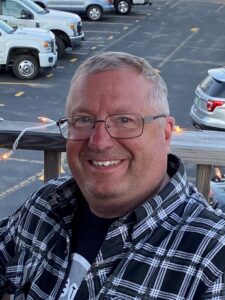 Andy was born January 8, 1962 in Niagara Falls, N.Y. to George and Audrey Shahin.  Andrew and Tami were married on July 2, 1989 in Bloomfield, Michigan.  He is survived by his loving wife of 32 years, Tami Shahin.  Andrew was her rock, best friend and soulmate. Together they had three children, Amber, Aaron and the late Thomas Shahin; Andy is also survived by his mother, Audrey Shahin; two brothers, Steven (Kathy) Shahin and George E. (Patti) Shahin; one sister, Barbara (Mahmoud) Batlouni; several nieces and nephews; God-father, Regis Woodward; he was preceded in death by his father, George Shahin and God-mother, May Woodward. Andy attended High School at LaSalle High School in Niagara Falls,  New York and then finished his last two years at Edgewood High School in Ashtabula, Ohio.  He received his Bachelor Degree from Eastern University. Andy, along with great friends, owned and operated Waterbed Island in Pontiac for 10 years and was where he met the love of his life, Tami.   He then went to work for Pitney Bowes in 1997 as a sales rep where he worked his way up to management and continued in that role for many years. He took a position as a Government Account Representative for Pitney Bowes from which he was planning his retirement from next year. Andy was an adventurous soul who loved to have fun, laugh and enjoy many activities in life. Andy has played hockey since he was 5 years old and went on to coaching hockey. He had such joy being the coach for his sons, Aaron and Thomas’  hockey teams. Currently coaching for Aaron’s team at Saginaw Valley College. Andy loved vintage cars, collecting and restoring them. He was an amazing mechanic. He loved attending car show, watching TV shows on cars, anything to do with cars. His talents continued as an awesome handyman and loved to work on remodeling his and Tami’s home. Andy simply made life fun, from jamming music on the lawn tractor to hanging around the campfire telling jokes. He enjoyed camping, kayaking and tubing. He loved taking trips with his wife, kids and friends to ride motrocycles, quads and snowmobiles. One of his greatest joys was spending time with his grandchildren and teaching them all about his enjoyments in life. Andy was always the voice of reason, always lending a helpful ear to his friends and family. He was so charismatic, witty and such a ray of light in all things. He will be dearly missed. Funeral service will be 11:00 a.m. Thursday, November 4, 2021 at VILLAGE FUNERAL HOME, 135 South Street, Ortonville, Michigan.   Pastor David Pniewski, officiating.  Interment will follow at Ortonville Cemetery, Groveland Twp., Michigan.  Family will receive friends on Wednesday from 3:00 – 8:00 p.m. at the funeral home.  Memorial contributions may be made to the Donor’s Choice. Envelopes are available at the funeral home. To send a condolence to the family please visit