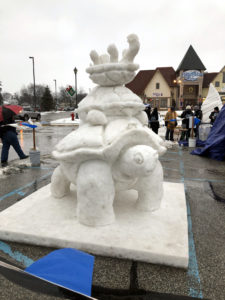 Hometeam II—a Goodrich area homeschool group sent two teams of four students to the annual cold weather event in Frankenmth to challenge 20 teams statewide
The high school competition is one of Snowfest 2020 events that took place Jan. 22-27.
According to event planners the first day of the festival drew a small crowd due to weather, but about 100,000 visitors viewed teams working on 10-foot by 10-foot frozen blocks of snow, forming some rather unique sculptures. 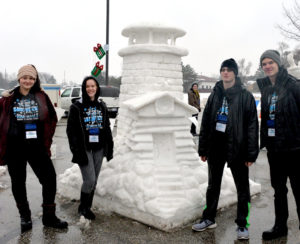 “There were no powers tools used,” said Kirby. “The teams worked through a cold rain on Saturday—but stayed together like a team and finished on top.”