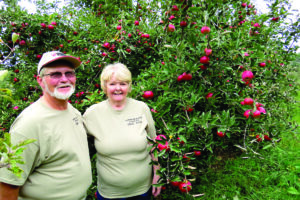 For more than a half century years Sharon and Dennis Ashton, owners of Ashton Orchard 3925 Seymour Lake Road have raised apples in the Brandon and Independence townships. However, earlier this fall Dennis was diagnosed with spinal stenosis—arthritis, a condition caused by the breakdown of cartilage in the lower back. As a result, his mobility is compromised leaving many of the day-to-day tasks of orchard operations undone. The condition is treatable and the Ashton’s plan to be open next year.
“We were open the month of October,” said Dennis. “But will only be here for a limited time before Thanksgiving.”
Ashton Orchard will be open Nov. 15-17 and 22-24 for apples and apple pie sale.
“I was out picking apples the day before (my diagnosis),” said Dennis. “I’d pick a bin of apples everyday in the fall. This year it was especially difficult to get workers.”
After purchasing a small orchard in the Clarkston area in 1968 the Ashton’s moved to 17 acres of vacant Brandon township land in 1976 and planted apple trees. They built a barn on the property in 1983 and opened a market and installed a cider press in the building in 1987. By 1999, they were harvesting all of their fruit in the township. Today, it covers 22 acres with approximately 2,000 fruit trees. They also grow numerous other apple varieties, including golden delicious, Northern Spy, McIntosh, Paula Red, Jonathons and Mutsu.