By David Fleet
Editor
Atlas Twp.-At 10:20 p.m., Sept. 22, the township fire department responded to a single-story barn fire in the 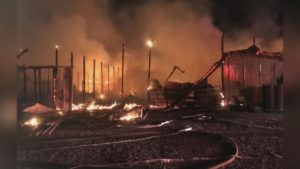 12000 block of Coolidge Road. Firefighters were advised that there were cats in the barn and no other animals.
Ed Klimek, township assistant chief was en route and were informed that the 100 foot by 120 foot barn was fully engulfed.
“I could see the glow in the sky from M-15,” said Klimek. “Considering the size of the barn and the massive flames, I asked for a second alarm.”
In addition to the township fire department, Brandon, Davison, Grand Blanc and Hadley assisted with the fire.
“All fire departments did an amazing job,” said Klimek. “Continuous water flow was maintained throughout the fire area operations. Once the fire was under control Brandon and
Hadley fire departments were released. Shortly after Grand Blanc was let go followed by Davison.”
The homeowner, stated that his daughter had gone upstairs and looked out the window and saw the flames. She alerted her parents and they called 911. The barn was a total loss of approximately $150,000 structure value and $50,000 contents value. At the scene the homeowner stated that there were some cats, four ducks and 16 chickens that did not make it out.
The township fire department cleared the scene and finished cleaning up at the fire hall at 3:50 a.m.