Request for Proposal Brandon Township is looking for sealed bids for the Architectural Design Services retrofitting existing public area counters and existing main doors to ADA standards at Brandon Fire Station #1 and #2. A full set of requirements are available through mail, email or fax upon request. Sealed bids may be mailed or delivered […] 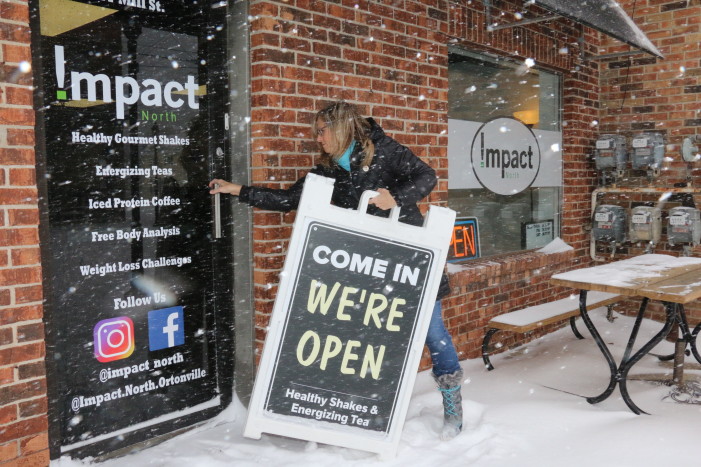 Merritt Dietz, owner of Impact North in downtown Ortonville, brings in the open sign on Jan. 28. Due to the snow, the business closed at 1 p.m. on Monday. Photo by Patrick McAbee.

Letters to the editor Feb. 2

(In response to “I’m not surprised”, a letter by Paul S. Lucas, The Citizen, January 19, Page 6) Dump this clown Dear Editor, I agree with Paul Lucas, I didn’t care for the language the newly elected representative used during a private engagement when referring to impeaching the current president but I don’t care for […]

Letters to the editor Jan. 26

The days of online readers enjoying the The Citizen newspaper for free are over. Starting now, folks who want unlimited access to our internet content at thecitizenonline.com must pay $35 annually for a subscription. “Good journalism isn’t free,” said Publisher Jim Sherman. “Stories don’t just magically appear. Somebody has to cover them, research them, write […]

By Shelby Stewart Staff Writer After more than a year, a stretch of M-15 in Ortonville will be designated as the Purple Heart Trail. The bill, now Public Act 543 of 2018, was introduced on May 22, 2018 and signed by Gov. Snyder in December. “The Purple Heart Trail is a visual reminder to honor […]

By Shelby Stewart Staff Writer As a wrestling referee for nearly three decades, Frank Olson has witnessed many epic battles on the mat. But a recent match Olson participated in was not fair, not on a mat and required an enduring spirit. In September of 2017, Olson found that his lymph nodes were swollen. “The […]

PALSHAN, NICHOLAS CHARLES “NICK” of Ortonville, Michigan. Died January 22, 2019.  He was 34.  Born May 31, 1984 in Pontiac, Michigan to Lee Edmund and Dorie (nee: Empey) Palshan.   He is survived by his parents, Lee and Dorie Palshan; two brothers, Kevin Lee Palshan and Kurtis James Palshan; and his beloved cat “Jimmi”.  Nick was employed […]