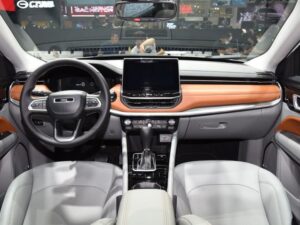 Bakker, a  2007 Brandon High School graduate and Senior Jeep Interior Designer at Fiat Chrysler Automotive recently showcased one of his auto creations, the interior of the 2022 Jeep Compass. While the 2022 Compass was released in India, China along with a few other countries earlier this year, the official roll out was unveiled in July at the Chicago Auto Show.
“It’s all about a balance and stretching out the elements of the interior,” said Bakker, 33. “We try to avoid clutter and make all the functions simple to use for the driver and passenger.”
A 2011 Detroit-based College for Creative Studies graduate, Bakker started his career with Ford Motor Company designing vehicle exteriors then moved to interior projects including the Taurus designed for sales exclusively in China.
“Cars were fun to draw and design, but there’s not a lot of freedom on the outside of the vehicle,” he said. “There’s more to work with on the inside of the vehicle in comparison.”
In 2016, Bakker moved to FCA located in Auburn Hills. The Compass interior was Bakkers first start to finish design project, spanning about 2 1/2 years to complete. 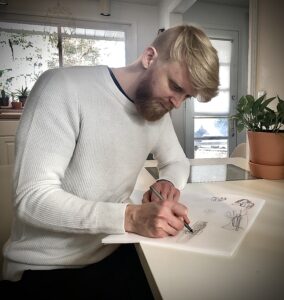 “The greatest challenge in the Compass is to incorporate existing parts with a host of new technology,” he said. “It all needs to fit together in a seamless interior that still feels like a Jeep. Safety is also a big part of the design with rounded corners and soft materials. The number of materials and parts in the interior are almost unlimited. Add to that all the technology and large screen sizes incorporated in a car today makes design a challenge, but very rewarding.”
A Windsor, Ontario native, Bakker and his family moved to Gulpen, a municipality in the southeastern Netherlands. The family then moved to Brandon Township when he was 8 years old where he attended elementary school.
Bakker still uses a pen and sketches the design on paper. “Many designers draw on a glass tablet but I still prefer the traditional paper, it just feels better,” he said.