By David Fleet
Editor
The first time Australia native Lyall Beveridge visited the United States he raved about American hamburgers, pizza and was surprised that school 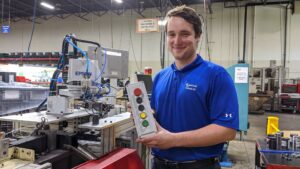 buses were yellow.
Five years later not much has changed.
In 2014, Beveridge was a 14-years-old high school student from Sydney who arrived in the United States and attended Goodrich High School for a few months as part of the American Scandinavian Student Exchange (ASSE). He was hosted by Terri and Mark Schall. He returned to Sydney in January 2015 following a six month stay.
In March 2020, on the eve of the coronavirus pandemic lock-down Beveridge now a 21 year old robotics-engineering college student returned.
“Hamburgers, deep dish Jetts pizza are still awesome,” said Beveridge, who again is staying with the Schall family.
Beveridge’s encore American experience now includes an internship with Brighton-based Schneider & Company. The Michigan company specializes in technology manufacturing products including assembly processes, testing and inspection, robotics and automation.
“It was a rigorous Visa process to get the internship,” he said.
Beveridge, lives in the suburbs of Sydney. With a population of about five million, the city is located on the southeast side of the country on the Tasman Sea. The snow free subtropical climate where the winter months are June and July include temperatures only dipping into the 40s. As the snow flies in a frigid Michigan January it will be summer in Australia, where temperatures average about 85 degrees daily.

He is a graduate of Killara High School, which includes grades 7-12, with an enrollment of about 1,600 students, about twice the size of Goodrich High School.
In Australia students are required to complete year 10 of school, and then to continue in either education or training, full-time paid employment, or a combination of education/training and employment until at least age 17. Beveridge was seeking a career in STEM, Science, Technology, Engineering and Math.
Following graduation he joined the Australian Defense Force where he served as a rifleman.
“I chose the ADF as my ‘gap year program,” he said. “We often do that before college for about a year. Now I’m out and a member of the Army reserves. The Army experience really helped me mature as person and earned money for college.”
In January 2018, Beveridge enrolled at the University of New South Wales, Sydney, as a dual major engineering-robotics and computer science. He also plays rugby for Baxter College, which is part of the university.
“I needed industry experience for credit,” said Beveridge.
So, during his third year of five needed to graduate Terri Shall arrived in Australia for his 21 birthday party.
“She surprised me,” he said. “Terri’s husband works for Schneider & Company and suggested I try for an internship there.”
Following several interviews Beveridge was hired and since March has been working in the United States.
“Michigan has a much stronger manufacturing economy than Australia,” he said. “We need to import a lot more from China than they do here. Here, if you need a part for a project it’s assessable —just pay the postage and it’s delivered in a day or so. Not so much in Australia. Parts are much harder to come by and cost significantly more.”
Due to the coronavirus, Beveridge’s VISA has been extended.
“The government is not letting me back in the country right now,” he said. “Although the virus has not been as bad as here. I truly appreciate the Shall family for taking into their home so I can experience America once again. Their kindness and generosity coupled with an amazing country has made this a great opportunity.”
Beveridge has found some new adventures in Michigan.
“I was loaned a Buick to drive here,” he said.
Australians drive on the left side of the road and the majority of vehicles have the steering wheel on their right side.
“Yes, I learned to drive on the wrong side of the road—it took a few months to learn on the back roads,” he said.
American beer is excellent, he added.
“I had my first Foster’s Beer here,” he laughed. “They don’t even sell it in Australia.”