By David Fleet
Editor
Groveland Twp.- The Road Commission for Oakland County recently ramped up tree removal before a few bats could call them home. 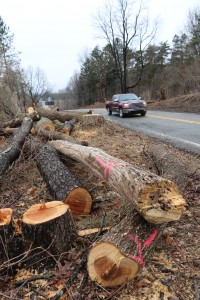 The RCOC started last month taking trees out of the right-a-way along Tripp Road between Dixie Highway and Grange Hall Road because soon bats coming out of hibernation may roost in them. Later this summer the dilapidated, pothole-filled roadway will be replaced and upgraded.
Two bats, the endangered Indiana bat and the threatened northern long eared bat, may roost in the trees and the U.S. Fish and Wildlife Service and the Michigan DEQ both say the trees need to come down now before the bats get to Michigan.

Kim Siegel, a Environmentalist II for the Road Commission for Oakland County said tree cutting projects area completed between Oct. 1 and March 31 due to bats.
“In the summer months the bats roost in trees,” said Siegel. “And because the Tripp Road area in Groveland (Township) is a non urban area the potential is there for more bats to be in the trees. And while the bats are south of Michigan now they will be heading north soon.”
It’s not clear the bats ever come to the township or Oakland County, but because of the possibility they may trees are cut during the winter, said Siegel.
According to the U.S. Fish & Wildlife Service, the northern long-eared bat is one of the species of bats most impacted by the disease white-nose syndrome. The Indiana bats are vulnerable to disturbance because they hibernate in large numbers in only a few caves. They have been endangered since 1967.