Battle for M-15 heats up

By David Fleet
Editor
In 1952, Harry Truman was president, gasoline cost 52 cents and a loaf of bread was 19 cents. 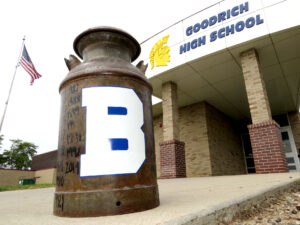 That same year Ortonville and Goodrich played football.
While plenty has changed since facemask-less leather helmets ruled —today the Brandon-Goodrich game is a yearly event as the Martians are now part of the 12 Flint Metro League teams which include the Blackhawks. The expanded Flint Metro League will crown a champion later this fall.
There’s a good chance that on Oct. 1, when the Blackhawks travel to the Roy U. Stacey Stadium in Goodrich for a homecoming game both teams will be undefeated in Flint Metro League play.

“That’s one of the games on the schedule that Tom (Alward) or I have to fire our kids up for,” said Head Coach Brad Zube, whose Blackhawks are 4-0 and ranked 5th in the AP Division 4 poll as of Sept. 24. “If you’re not fired up for that game something is wrong with you. It’s a brand new Goodrich team, I’ve watched them on film and a scrimmage. They are playing old school football, they are ground and pound, they are big up front. We are both very different teams then we were a year ago. This is a clean slate and they want us badly—they want every piece of us and we’ve got to be ready for them.“
For four out of the past five years the Blackhawks have kept the Milk Can Cup trophy awarded to the winner of the rivalry. The can was donated by Brandon Township’s Cook’s Farm Dairy and is a symbol of both communities’ rich farming tradition. Each year the score and date are etched on the cup, with the winning team keeping the cup until the next season.
Goodrich Head Coach Tom Alward in his 29th year at the helm said his Martians will be ready.
“If you don’t get fire up for this game you should not be coaching or playing,” said Alward. “It’s a big game every year with the Blackhawks, we’re the same size, same league and geographical right down the road. Both schools point to this game at the beginning of the season. The Blackhawks are very well coached but we’ll be ready to play.”
According to the Michigan High School Historical Game-by-Game results, the Brandon-Goodrich rivalry dates back to 1952 and continued until 1992. In 2014 the rivalry was rekindled as the Martians won 33-7. Then in 2015 Zach Clements hit the game winning 37 yard field goal propelling the Blackhawks to a 11-10 victory over the Martians. It was the first win for the Blackhawks since 1986 and narrowed the overall series to 30-12 in favor of Goodrich. Then in 2016 Blackhawk Kevin Bickett raced for four touchdowns as the Blackhawks topped the Martins 35-14 at a packed Roy U Stacey Stadium in Goodrich. The win was the second straight for the Blackhawks over the Martians and was the debut for new coach Brad Zube.
After not playing in 2017 the battle heated back up in 2018 as the Blackhawks victory streak continued over the Martians with a 26-7 win at Blackhawk Stadium. Then in 2019 the Martians won at home 32-26. In 2020, despite a global pandemic, abbreviated pre-season and only a handful of fans in attendance—the Martian-Blackhawk football rivalry got just a smidge feisty as the Blackhawks topped the Martians 41-28.
The series record is now at 31-16 in favor of the Martians
At 4-0 the Blackhawks ranked 5th in Division 4 AP high school football rankings for the state heading into week five of the season. The Martians, 3-1 are just out of the top 10 having received two votes.