By Shelby Stewart
Staff Writer
June 26 could have turned out very different for Cheryl Robinson if not for her studious granddaughter. 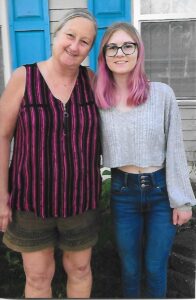 “I just woke up that morning, and I had a headache like I never had before in my life,” said Robinson, a Brandon Township resident and para-professional at Harvey Swanson Elementary School. “It was like there were two cement blocks just crushing my head.”
Robinson had told her granddaughter, Hailey Owens, that her head hurt very badly, and that she felt sick and couldn’t walk, so Owens tried to help her up when Robinson passed out. At that point, Hailey called her aunt to come back to the house, then called 911.
It turned out that Robinson had a ruptured brain aneurysm, which is fatal 50 percent of the time.
“When she had it, I wasn’t even supposed to be there,” said Owens, 15 and a sophomore at Brandon High School. “But I decided to take Algebra II over the summer so in senior year I could take AP calculus, and I have siblings at home so I went to my grandma’s to get a break from my siblings and do homework.”

Owens and one of her younger sisters had gone over to their grandma’s together, both to do homework and help out with her great grandma, who has Alzheimer’s disease. Normally, her aunt helps take care of her, and Owens goes to visit and give her aunt a break.
“At first, I didn’t know what to do when she passed out, so I called my Aunt and she said to call 911. That was my first time calling 911,” said Owens. “My little sister was with me, and my great grandma has Alzheimer’s, so I had to be in charge. I had to make sure my great grandma was okay and tell my little sister everything was fine.”
Robinson said she remembered waking up sitting in the chair in her living room with Brandon Fire and EMS around her. The emergency crews transported her to Genesys Hospital and, once she got a CT scan, was transferred to St. Mary’s of Saginaw.
“When I woke up in the hospital after my operation, I had five doctors staring at me,” said Robinson. “I asked them what was going on and what happened, and they told me I had an aneurysm burst in my head, they operated, put in stints and a coils. They were just in awe that I was talking and sitting up because most people that have aneurysms die or they go in comas, and if they come out of comas, they can’t walk or they slur their words.”
The doctor that operated on her said she was a miracle, and the other doctors wanted to see because she was talking like nothing had happened.
“He said whoever called 911 was the smartest person ever because that saved my life,” said Robinson.
Owens said her family didn’t know it was an aneurysm at first, and that they were worried her grandma wasn’t going to live through it.
“I’m really happy I chose to go over there, because we don’t know what would have happened,” said Owens. “Afterwards when she was out of the hospital, I would go on weekends because I love my grandma and I wanted to give my aunt a break and I would help take care of her. I also help with my great grandma, I help give her food because my grandma can’t cook and I need to make sure she eats because I love both of them.”
Owens visits on weekends to help cook and do laundry, as Robinson can’t go downstairs and can’t lift more than five pounds, so she doesn’t strain the coil or stint. Her recovery can take six months to a year.
“My doctor told me I’m on vacation for six months,” said Robinson. “I think God knew I wasn’t done with my grandbabies yet.”
Owens is her oldest granddaughter, and she has big plans after high school.
“My original plan is going into acting and theatre, but I know that field isn’t always successful,” said Owens. “I’m going to apply to a lot of schools, my top is NYC, but it just depends what college I get into.”
She said if she gets into Harvard or Yale, she’s going to become a doctor.
“I’m going to become a neurosurgeon,” she said. “I always thought about it, but after what happened with my grandma, I’m glad I saved a life, so that did make me want to become a doctor.”