By David Fleet
Editor
The Michigan Interscholastic Athletic Administrators Association, has selected Chris Deines of the Brandon School District as the Region 9 Athletic 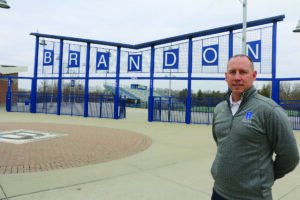 Director of the Year. Deines is one of 14 athletic administrators in the state to be honored this year by the MIAAA which includes more than 700 athletic directors serving Michigan school districts. The Region 9 includes the Flint Metro League, Genesee Area Conference, Blue Water Area Conference, Independent Schools Conference, Inner State Conference, Michigan Summit, Mid Michigan Conference and North Central Thumb.
Deines’ philosophy on high school athletics is that it is an educational extension of the classroom, a chance for students to be well-rounded physically and mentally.
“I’m humbled to be selected by my colleagues as AD of the Year,” said Deines. “Anyone who knows me understands I do this job for the athletes, coaches and the school district. It’s an honor to be with the Flint Metro League and the MIAAA.”
Deines earned his bachelor of science degree in education from Grand Valley State University in 2004 and a masters degree in teaching from Marygrove College in 2010. Deines began his career in education in 2000 as a high school baseball and football coach at Greenville High School while also serving as a teacher beginning in 2004.
In 2006 he moved to the Durand School District where he taught physical education and health in addition to coaching varsity baseball, football besides serving as athletic director and community enrichment director. During his coaching tenure at Durand, Deines was named District Baseball Coach of the Year and League Coach of the Year. He also served as an MHSAA registered official from 2009-11. While at Durand, help create the Flint Metro League-Genesee Area Conference Coaches vs. Cancer Basketball Challenge to raise funds for the American Cancer Society. During his time as an athletic director Deines coordinated and developed community enrichment programs at Durand and created the Triple-Threat club for three sport athletes.

In that capacity, he has worked to connect community youth programs with the district’s middle school and high school athletics. To build those connections, Deines barnstormed with coaches and they came up with the idea to offer free clinics to kindergarten through sixth grade students prior to the start of football and basketball seasons.
In August 2016, Deines stepped in as Brandon Athletic Director. As the Brandon AD he founded the Salute to Service’ during a Brandon football game as a tribute to all 1st Responders and military, served as the Flint Metro League Secretary in 2016, and the Flint Metro League President from 2017-19. Deines is currently the Region 9 Alternate Representative, a member of the MHSAA Basketball Tournament Officials Selection Committee, and a presenter at the MIAAA Annual Conference. In 2020, Deines was named assistant Brandon High School principal.