The Blood Moon over the Cornerstone Baptist Church Ortonville via a zoom lens set to 115mm with a F:4.5 aperture, 5 second shutter speed and ISO 640. Photo: Heath Zeitz 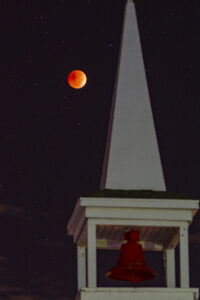 upward and captured a Blood Moon over the village.
“I was very lucky that the sky was clear,” said Zietz. Typically I am always fighting the clouds when it comes to astrophotography.”
Zietz’s photo from the parking lot at Cornerstone Baptist Church, captured the first time in U.S. history a total lunar eclipse appeared on Election Day, Nov. 8. The next one is set for March 14, 2025, according to NASA.
A lunar eclipse is when the sun, earth and moon align so the moon passes into the earth’s shadow. When the moon is within the umbra or the fully shaded inner region of a shadow cast by an opaque object it will change to a reddish color, thus a ‘Blood Moon.’
Tuesday’s eclipse spanned about five hours, with a peak in southeastern Michigan between 5:17 a.m. and 6:42 a.m. according to NASA. The eclipse will be visible across the United States.
Dustin Scriven, is a 2011 Brandon High School graduate and earned a bachelor of science in astrophysics from Michigan State University. Scriven, also earned a master’s degree in physics from Texas A & M and is now working on a doctorate in nuclear physics.
Following more than a decade of advanced scientific study, Scriven has not found a correlation between a full moon and strange behavior.
“I can’t speak for the oddities of the eclipse although I am privy to bad things on the full moon,” said Scriven. “But none-the-less, it’s a cool phenomena. Scientists often talk about what we can’t see and it’s often difficult to explain things, but the eclipse and Blood Moon everyone can see them if they stay up late or get up early. It’s exciting to see the solar system in action.”
Scriven said the earth is casting a shadow on the moon and it’s an amazing event.
“It’s a drastic change from our routine,” he said. “The earth spins everyday, and people take it for granted, but we forget why that happens. It’s a consent, but when the eclipse comes around it’s a reminder the universe is dynamic.”