Bookin’ it for your Library 5K

By Shelby Stewart
Staff Writer
Jill Norris and her family have run the Bookin’ it 5K for the Brandon Township Public Library for six years and counting. 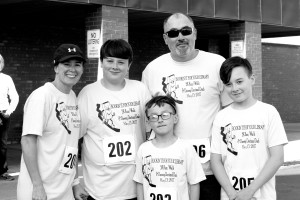 “It was a community event to do with the kids,” said Norris who takes on the 5k with her family, husband Josh Norris and three sons Jake, 15, Joey, 13, and Jayson, 10. “Other families were doing it. We didn’t sign up for the first one until the night before.”
On May 12, the Norris family along with hundreds of runners will take on the Bookin’ it 5K. Early registration for the Bookin’ It 5k and the Dewey Decimal Dash are open, and the deadline for early registration ends May 5. Online registration is available at brandonlibrary.org, and registration forms are available there as well.
The prices for early registration are $20/person including a shirt, $15/person without a shirt for the 5k; $10/person 12 and under including a shirt, $8/person 12 and under without a shirt for the Dewey Decimal Dash. The family price (forms must be turned in together or register online under the family plan) is $75/family. Prices go up to $25/person for the 5k and $15/person for the Dewey Decimal Dash after May 5. Packet pickup is May 11 1-5 p.m. at the library, or May 12 beginning at 7 a.m. Race registration begins at 7 a.m. the day of the race, and the Dewey Decimal Dash begins at 8:30 a.m. The 5k run/walk beings at 9 a.m.

The Norris family missed only one year so far.
“The first year we pulled our youngest in a wagon,” said Norris. “Last year he not only won the Dewey Decimal Dash, he won a medal in the 5k. He ran his little heart out.”
Their first two years, the whole family walked the 5K, even bringing their dog sometimes, and the older their kids got, the more they were able to run in the race.
“They love it,” she said. “They see tons of their friends, teachers and people from the community.”
Norris likes doing the race for multiple reasons herself.
“It’s fun to see the other small businesses,”she said. “I look forward to being part of the community. And to benefit the library of course.”
Call Robin Loughlin at 248-892-2762 with any questions.