By David Fleet
Editor
“It doesn’t get any better than standing around a campfire in front of a lake eating ice cream.” 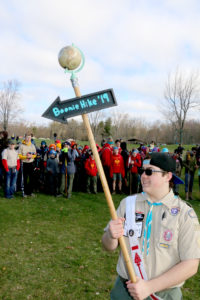 The statement from an area scout was overheard by Jeff Hanft of Ortonville Boy Scout Troop 139 on the banks of Big Fish Lake this past weekend as about 300 scouts gathered for the annual Boonie Hike 2019.
“The scout’s comments sum up the weekend at Big Fish Lake,” said Hanft.
What started as a hike in the mud from the horse camp on Fox Lake Road with about three or four scout troops in 2008 has grown over the years, recalls Hanft.
“ The camp was small so we asked the DNR if the scouts could camp overnight at Big Fish Lake in April before was busier later in the summer,” he said.
“Since the Ortonville Troop was the farthest north in the Pontiac-Manito District the Big Fish Lake area was tagged “The Boonies.”

The name stuck and has grown to more than 19 Boy Scout troops and nine Cub Packs spending two days traipsing in the woods.
“The hikes are just way more fun when there’s more scouts,” said Hanft, a leader for the past 17 years. “Anytime we can get these kids outside, around a campfire, carrying a backpack and finding their way on some muddy trail miles from a road it becomes a sense of accomplishment.”
This year troops from Capac, Clarkston, Croswell, Davisburg, Lake Orion, Ortonville, Oxford, Waterford and Yale attended. Several communities have more than one troop.
“We stress safety,” he said. “A special thanks to the Lapeer County Sheriff who stopped traffic on Hadley Road to let us cross the road when we started on the trek. This year we welcomed an all girl scout troop. We also had two scouts from Croswell that working on a hiking merit badge that required 20 miles.”