By Shelby Stewart
Staff Writer
Brandon Twp.-At 1:13 p.m. Oct. 29, the Brandon Fire Department received a call of a house fire in the 2000 block of Ardsley Road. 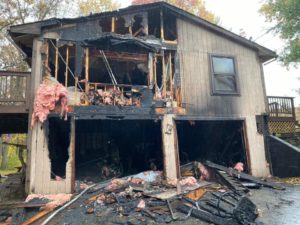 Upon arrival, firefighters found a fire that had ventilated through the garage of a two story home, with fire and smoke coming out of the garage doors. The garage was attached to the first story with part of the living quarters above on the second story.
First responders were on the scene until 6:27 p.m. due to extensive clean up and to assure the fire would not rekindle and keep everything under control.
Brandon Fire had assistance from mutual aid partners Atlas, Davison, Groveland, Hadley, Independence and Oxford township fire departments. There were no injuries, and the homeowner’s son was able to get their cat out prior to first responder’s arrival. The Oakland County Sheriff’s Office Fire Investigation team responded as well, and believe the fire to have started in the garage. The family stated they had been using the lawn mower, and the fire involvement was heavy in the area of the lawn mower, but no exact cause could be pinpointed.