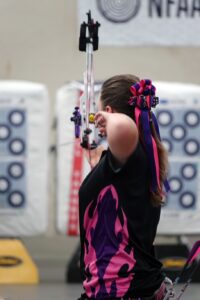 Over more than a decade of work, skill and a host of tournaments Prentice, a 17-year-old Brandon High School Senior, recently signed a letter of intent at Southeastern Illinois, located in Harrisburg for a full scholarship on their collegiate archery and pistol team.
“I fell in love with archery,” said Prentice. “My uncle was a bow hunter and I’d check out some of his pictures. That got me started.”
When Prentice was just 5-years-old she attended an archery camp at Disney’s Fort Wilderness and was given her first compound bow, a seven pound pull for Christmas. At about 7-years-old, Prentice began competition at the state level. Since than she was tops at the Meijer State Games in Michigan along with a national tournament.
“I’ve won every state tournament since I was 7-years-old,” she said. “I won in Las Vegas too.”
Prentice shoots the Mathew’s TRX 34 compound bow with a 50 pound pull, Dead Center stabilizers and Black Eagle arrows. Indoors the targets are at 20 yards and out to 40 yards for the outside 3-D shoots.
“I can hit a dime or nickel at 20 yards and a quarter for 40 yards,” she said. “I block everything out in the world when I shoot. I can drill a hole in the target and not pay attention to anything else around me. The old adage ‘aim small, miss small’ is very true-it’s my motto every time I’m on the line.”
At Southeastern Illinois, Prentice will compete in individual and mixed competition. She’ll study Criminal Justice and someday work in the National Parks law enforcement.
Prentice is coached by Joe Bailey, a five-time national champion and in 2008, he competed in the men’s individual compound at the Paralympic Games in Beijing, and professional archer Cara Kelly. Her home range is Flint Bowmen located in Grand Blanc.
Prentice says it’s all about focus and shoots about 100 per session. The competition is 72 arrows.
“It’s a growing sport and more women are getting into archery,” she said. “I’d love to be on the U.S. Olympic team, however they don’t use compound bows.”