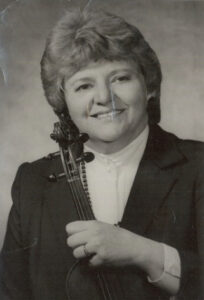 She was born on Jan. 7, 1938 in Chicago, IL to John and Mary Horak both Czech Nationals. She lived in Lyons and Wood Dale, Illinois and graduated from Fenton High School in Bensenville, Illinois in 1956. She attended Illinois Wesleyan University and VanderCook College with Bachelor and Master’s Degrees in Music Education.

She married Everett R. Smith of Ortonville, Michigan in 1959, also a band and music teacher, retiring from the PHM School Corporation in 2003. He was a co-conductor of the New Horizons Band in Elkhart.

She also attended the University of Michigan, University of Wisconsin and taught string pedagogy at George Mason University in Fairfax, Virginia. She taught orchestra at Westside Middle School and Memorial High School in Elkhart and retired from Penn-Harris-Madison School Corporation in 1994.

A versatile musician, she played violin in the Flint, Michigan, South Bend and Elkhart Symphony Orchestra as well as string bass and euphonium in the Elkhart Municipal and French Horn in the New Horizons Band. She belonged to the Elkhart Vintage Auto Club where she was the secretary for four years and was a member of the Matinee Musicale.

Her hobbies were building tall ships, gardening, and playing oboe in the Elkhart Heritage Woodwind Quintet.

Camille is survived by her husband of 61 years, Everett Roy Smith, children: Pamela C. Smith of Castlerock, CO, Paul Smith of Sacramento, CA, Philip (Laurie) Smith of Lakeville, IN and Peter Smith of New York, NY, 3 grandchildren: Hannah, Connor and Jackie. She was preceded in death by her parents, a brother Gene Horak and a sister Ruth Chudoba.

Visitation will be from 10 am to 12 pm on Friday Feb. 12, 2021 at Stemm-Lawson-Peterson Funeral Home, 1531 Cobblestone Blvd., Elkhart, IN 46514 where funeral services will be at 12 pm. Burial will follow at Adamsville Cemetery.

Online condolences may be made at www.stemmlawsonpeterson.com.