By David Fleet Editor Goodrich-On Monday night, during a special meeting, the school board of trustees voted 7-0 to extend a contract for Michael J. Baszler as high school principal. Baszler, 40, an Atlas Township resident, has been principal at Birch Run High School, Progressive High School and Birch Run Early College Program since 2007. […]

Farewell to My Fletcher Family  Margo Gilbert, Ms. McMahan’s 6th Grade class  The halls of Brandon Fletcher have withstood many stampeding feet.  Those feet are connected to only a fraction of the people who will miss the school.  With the school closing down, the whole district is changed.  It doesn’t matter how long of a […]

Katelynn Mumford, Mrs. Voyer’s 4th Grade class   My name is Katelynn Mumford, I am in fourth grade.  I have only been in BFIS for about a year and the thing I will miss the most are the amazing teachers and of course all the good books in the library.  The reason I will miss […]

What I’m Going to Miss about B.F.I.S.   Kayla DePalma, Ms. Luchow’s 5th Grade class   BFIS is closing down.  The thing I’m going to miss most about BFIS is the creativity and fun throughout the school.  The reasons are the colorful and meaningful bulletin boards, the decorated ceiling tiles and the fun things we […]

By Susan Bromley Staff Wrtier Ortonville- Nearly 500 people bid a fond farewell June 2 to Fletcher Intermediate School. The goodbye celebration included past principals Don Patrick, Jeff Beane, and Carol Bogner, who were joined by numerous retired teachers, as well as current and past staff, parents and students in closing a chapter in Brandon […]

By David Fleet Editor Last month about 40 Chinook salmon set out on a two-year jouney thanks to the efforts of a local school. On May 4, Peggy Miller-Zelinko’s science class at Brandon Academy of Arts & Sciences released their salmon from the shore of the Clinton River in Rochester Hills, a local watershed that […]

By Susan Bromley Staff Writer Brandon Twp.- Aqua Club will manage the Brandon Aquatics Center. At their May 15 meeting, the school board approved by a 5-2 vote a 2-year contract with Aqua Club at a cost of $40,000 annually, to provide services at the pool located at Brandon High School. Board President Kevin McClellan, […] 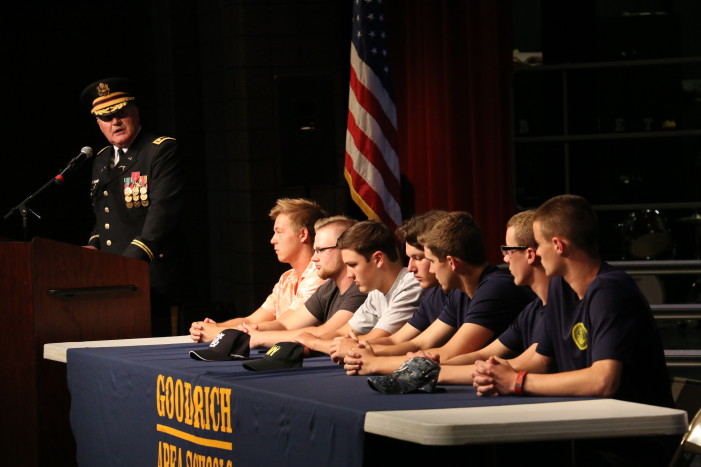 Dear Ortonville-Brandon Community, Over the past several months, the Brandon School District has been working on plans to re-launch community education and make a number of much needed improvements to our aquatics program. To provide background on the aquatic center, it was built in 1996 through a local bond initiative and has served both the […]

On April 19 seven Goodrich schloar athletes signed letters of intent to attend colleges this fall. Rachel Dolan signed with Grand Valley State University to pole vault as part of the Lakers track and field program. While at Goodrich Rachel has been a multiple time conference champion in the pole fault, she holds the school […]