By Shelby Stewart Staff Writer Goodrich High School is putting on a night of one act plays Nov. 8-11. The show consists of three, one act productions: Tell-Tale Heart, The Gift of the Magi and Tracks. “It’s more opportunities for students to act,” said director Steven Mitchell, who directs the show ‘Tracks.’ Lindsey Carlisle is […]

By David Fleet Editor Goodrich- On Monday night five high school students were recognized for their high PSAT/NMSQT scores during the board of education meeting. Mike Baszler, high school principal announced that two were commended students and three are now PSAT/NMSQT scholarship semi-finalist. “We’ve not had this many in 10 years,” said Baszler. “We are […] 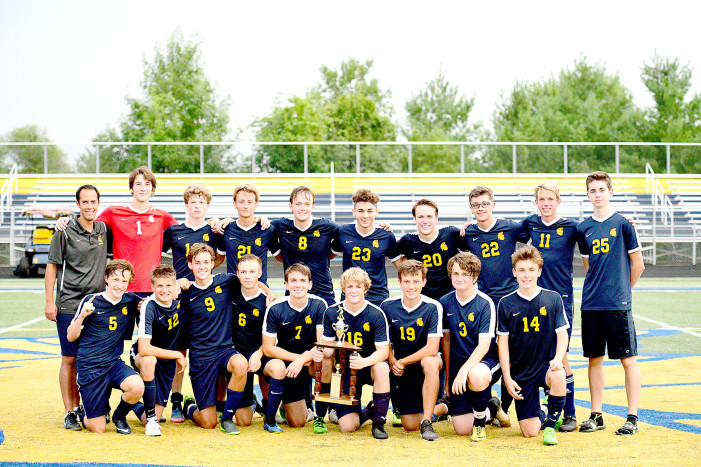 By David Fleet Editor The 2018 Martians are ready to build off a stellar turnaround season and return to the playoffs. Last year the Martians tallied an 8-2 season after a dismal 0-9 campaign in 2016. “We are very optimistic about this team,” said Head Coach Tom Alward, beginning his 27th year at the helm. […]

By Shelby Stewart Staff Writer Last month a fish tale ended for a school. On May 2, Peggy Miller-Zelinko performed her annual project with her 5th grade class to raise salmon. “I started this program five years ago with the students of Brandon Academy,” said Miller-Zelinko. “This year I am teaching at Harvey Swanson and […]

By David Fleet Editor On May 20-22, BHS freshman Emma Martin, Ella Miller, and Christa Spencer participated in the National Transportation and Civil Engineering Bridge competition. The event is coordinated by American Association of State Highway and Transportation officials (AASHTO). The bridge building team of “Triple B” traveled to Franklin, Tenn., to compete against five […]

By Shelby Stewart Staff Writer Three Brandon High School students are honoring a fallen deputy in a new way. Recently, a photo of Deputy Eric Overall, who was killed in the line of duty on Thanksgiving 2017, made up of student photos was hung in the cafeteria, along with a decal that says ‘Never Quit’. […]

By David Fleet Editor Goodrich-Students at high school have given GHS Senior Lauren Hunt a hand. Many hands. For her senior capstone project Hunt utilized her artistic abilities and opted to rid the school of a white drab hallway with a mural featuring the hand prints of all the seniors. “About 125 of the seniors […]

Both Goodrich Martian Robotics teams 494 and 70 competed in the Robotics World Championships at Cobo Convention Center on April 26-28. More than 40,000 spectators and 400 high school teams attended the three day event divided into six divisional competitions. The top two alliances moved to Ford Field for the best two out of three […]