Groveland Twp.-Last week, Anne Walters had the feeling that she’d been robbed. 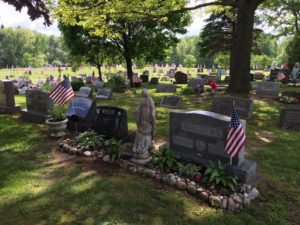 “It was like my house had been broken into and destroyed,” said Walters. “It just makes my heart ache.”
Though it wasn’t Walters’ house that had been destroyed. It was the graves of her father, brother, aunt and uncle.
Like many others with loved ones in the Ortonville Cemetery, 175 N. Ortonville Road, Walters discovered that all of the edging, plants, flags and mementos on and around her family members’ graves had been removed and thrown in the dumpster by the sexton.
“There was a caretaker who was there for many years, and he did the spring clean-up,” she said. “After he died, they hired a new caretaker, and we started seeing on Facebook that the place is pretty much destroyed.”
The Ortonville Cemetery website says that April 1st is the deadline to remove things before spring clean-up, but it also shows the rule for permanent plants and edging around graves. 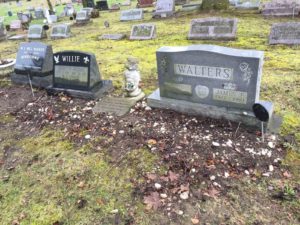 “As far as I know, you can go 18 inches out from the graves for edging and stuff, and Bob made sure of it, so everything conformed to that,” said Walters. “There was no notice to anyone about this, it just happened.”

The Citizen reached out to the president of the cemetery board as well as the current sexton for a comment, but did not receive a return call.

Walters’ family has been in Ortonville since 1951, and her father served on the cemetery board until he passed away in 1981. His grave had previously had a few plants, stone edging, and a toy car placed on the headstone by Walters’ nephew over 20 years ago.
“He never got to meet my dad, and he wanted his Papa to have something to play with,” she said. “The dumpster was full up to the top with mementos. I don’t understand why nobody was notified and why they went about this so drastically. I feel like they insulted the people in Ortonville and disrespected the graves of the people that are there.”
In addition to her father, nearby is her little brother, who was murdered in 1975. Also in the cemetery are her aunt and uncle. Her aunt was a nationally known artist, and her medium was stones.
“FDR had one of her art pieces on his desk,” said Walters. “Many sitting governors had her pieces on their desks. Of course she wanted stones on her grave. My little brother was a boy scout, and he was part of the group that helped maintain that, and I feel like they really disrespected him by destroying his grave like they did. I feel like it’s a wound that just got picked open again.”