By David Fleet
Editor
Brandon Twp.-More than a half century ago when General Motors released the 1957 Chevrolet 210—an iconic family car emerged. And while township 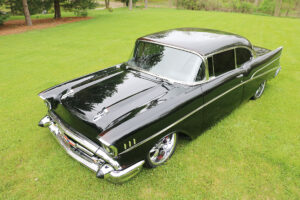 resident Eric Payne’s ground up rebuild of the popular Chevy Bel Air’s plainer-trimmed little brother transcends the “mom & pop,” ride, the family spirit of the 210 two-door sedan remains somewhere between the layers of clear coat and within the massive 495 horsepower GM V8.
“I’m a IT Executive by day and a gearhead forever,” said Payne, 50. “I made the decision a few years ago I had to build this car. So I woke up one morning and it all began.”
Payne’s attraction to the 1957 Chevy started from a similar ride his father once owned back in the 1960s.
“My dad drove his grandfathers’ 1957 Chevy and later he bought one of his own—then sold it to buy me my first car, a 1969 Firebird,” recalls Payne. “Today dad still wants a 57, so after working weekends and nights for about three years in my pole barn I finally rolled my Chevy out earlier this year.”
Payne’s debut of his classic Chevrolet was to be at the 69th Annual Detroit Autorama which was scheduled to proceed on April 30 – May 2, at TCF Center in Detroit. However, the event was canceled due to the COVID-19 numbers steadily increasing in Michigan.

Payne’s Flint-built Chevrolet 210, was the midrange model of the 1950s Chevrolet and was equipped with either a 235 cubic inch six cylinder or the small block 283 cubic inch V8 along with a host of rather ordinary features including a sticker price of about $2.500.
The transformation to a street rod was extensive.
In addition to the GM V-8 powerplant, Payne added a T-56 Magnum six speed transmission and Centerforce Solid Street Twin Disk clutch. The underside also includes a three inch stainless exhaust, Borla S-Type’s with Pypes cutouts, Wilwood Brakes and Hydraulic Clutch and CPP Power Steering. The suspension is courtesy of RideTech AirPro Control System with ShockWaves RideTech Tubular StrongArms.
“For today’s hot rods stance is everything,” he said. “It goes from about 1/2 inch off the ground up to 7 inches—it’s a major lift.”
The stainless was restored by Gordon Duda, the Chevy rolls on Ridler Wheels, with 20 inch x 10 inch rears – 18 inch x 8 inch fronts on Toyo Nitt tires 295/35R20 rears – 225/45R18 fronts. Inside are J.W Speaker Evolution J2 JBL and Infinity Speakers, Kicker sub, Kenwood Amp 2000W.
“The sound system had to be louder than the car,” he said.