By Shelby Stewart
Staff Writer
On Dec. 1, the Brandon School District was closed due to staffing shortages a reflection of the connectivity to the Oxford community. 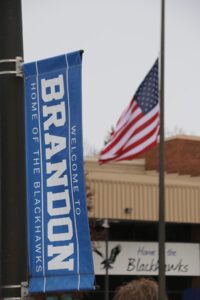 The district was also closed due to potential threats on Dec. 2
At 12:51 p.m., on Nov. 30, Ethan Crumbly, a 15-year-old Oxford High School student opened fire in Oxford High school. Three students died on Nov. 30, while seven other students and one teacher were taken to various hospitals. On Dec. 1, a fourth student passed away due to injuries.
The victims include Tate Myre, 16, Hana St. Juliana, 14, Madisyn Baldwin, 17 and Justin Shilling, 17. Three student victims were still in the hospital as of press time on Thursday in varying conditions. The teacher and three students were treated and released.

According to Oakland County Sheriff’s Office, over 100 9-1-1 calls came in, and five minutes after the first call came through, the deputies had the suspect in custody.
Hundreds of deputies responded from more than a dozen different law enforcement agencies, and 11 fire service agencies also responded to the scene.
Crumbly faces one count of terrorism causing death, four counts of first degree murder, seven counts of assault with intent to murder and 12 counts of possession of a firearm in the commission of a felony and will be charged as an adult.
A team of Oakland County Sherriff’s Office deputies from the Brandon substation were first on the scene other than the school resource officer that was already in the building.
Lt. Greg Glover, Brandon substation commander along with other Brandon deputies were part of the 10 man entry team going door to door in every classroom at the high school.
“We encountered carnage walking into the building,” said Glover. “Many kids injured, many kids shot, some fatally.”
“The ALICE training was very evident with the Oxford Staff, the locking of doors, the barricading of doors saved many, many lives,” he said. “Having a school resource officer is always big, if not armed security on top of that, those were big factors in not having more fatalities or injured.”
“We’re going to do more to shore up training and things that we will learn from this event to tighten up the security even tighter and making sure that faculty follow those rules to a ‘T,’” he said. “Very proud of my guys getting there as quickly as we did, did everything they’ve been trained to do, and did their job to the utmost. There was no hesitation by the officers and myself, we entered that building immediately upon arrival and did what we had to do.”
Brandon Fire Department responded with two Advance Life Support ambulances knowing the severity of the situation at Oxford High School.
“We were surprised and shocked by the emergency dispatch information received prior to arrival,” said Brandon Fire Chief David Kwapis. “One of our crews were part of the initial response inside the high school. They worked to assist the many, many victims.”
“Our thoughts and prayers are with the Oxford community the First Responders, victims and all the families impacted by this horrific tragedy.”
Brandon Superintendent Dr. Karl Heidrich responded to the shooting.
“Our hearts go out to the entire Oxford School Community District,” he said “There are no words to describe this tragedy. It is a very difficult time, and our thoughts are with everyone impacted.”
Anyone that needs to talk to someone in this difficult time can find resources on brandonschooldistrict.org
“People in the Brandon Community have loved ones, siblings, friends, and other family members who are students or staff members in Oxford. This tragedy has affected all of us deeply,” said Heidrich in a letter to parents in the district. “Please be aware that if you or any Brandon student needs help through this time our mental health professionals are available. Student safety continues to be our top priority. We currently have our building security protocols in place including a security guard on site every day in every building as well as our Oakland County Police School Liaison. We will also have additional security supports in our district beginning Thursday, December 2nd.”
Goodrich School District is following a similar plan.
“It was with heavy hearts that we, along with the nation, watched the events unfold at Oxford High School. Any school shooting is a tragedy for the entire community, but to have it happen so close to home was shocking. The students, staff, parents, first responders, and the entire Oxford community are in the hearts and minds of every Goodrich Martian,” said district superintendent Wayne Wright in a statement to families.
“School counselors, social workers, and mental health staff are on hand for any student, staff member, or parent who needs to talk today, or in the coming days, as we all try to process what has happened. School Resource Officer Deputy Seely and the Genesee County Sheriff will have a greater presence in the buildings with the district this week,” he said. “Please know that student safety and well-being remain our number one priority. Goodrich Area Schools is committed to creating a safe school environment where students can learn, grow and our staff can support them through the process.”
To report any threat to your or another’s safety, call or text Ok2Say or download the app. Call 855-565-2729 or text 652729. Students in the Brandon school district can also call the Blackhawk Hotline 248-660-0138. Any reports can be made anonymously.
“The kids are given a phone number at school that’s an anonymous phone call they can make, I would say don’t ever keep or hide that information. It’s not how I perceive a threat or you perceive a threat, it’s how that child receives a threat,” said Glover. “I would rather check 1,000 dead ends than to let one slip by because you didn’t say something. If you don’t feel comfortable going to a faculty member, they can come to that substation, our door is open.”
Anyone wanting to donate to the families of the victims can do so at any Genisys Credit Union.