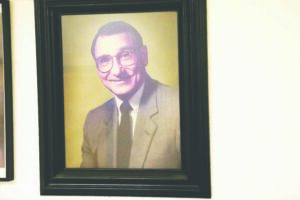 He was 88 years old.
Harvey was a resident of Ortonville, and became an educator in the Brandon School District in 1959. His wife, Ruth, was also a teacher in the district. He retired in 1988, along with Belle Ann Elementary School principal Bud Swanson. The current Harvey-Swanson Elementary School is named after the two of them.
“I was there in 1968, and Bob was already principal of the Burt building when I was there and he stayed principal until he retired,” said Don Patrick, who was principal of the former Brandon Fletcher Intermediate School. “Bob and Ruth, Ruth was a teacher at Belle Ann Elementary at the time, they lived on Church Street in the village. They were kind of like icons of Ortonville. Everybody loved Bob and Ruth, they were kind people, they were generous people. If you needed help, you could turn to them.”
Patrick remembers Harvey as empowering. He said he empowered his teachers and staff to start new programs, including getting the special education program up and running.
“Bob was just a wonderful person, his staff loved him. And they never left him,” said Patrick. “Nobody ever left the Burt School. His secretary was Kathleen Leece, she was his secretary the whole time until he retired, she just adored him. They were just solid members of the community, they were trusted people, and kids loved them.”
Patrick said any time he had to come into town for a conference or a school board meeting, Harvey would invite him for dinner, since he lived outside of Ortonville. But it was the dedication to education that impressed the superintendent at the time, Richard Wilson.
“Back then, we only had two elementary schools, Bob was at Burt and Bud Swanson was at Belle Ann,” said Patrick. “Our superintendent at the time was all for honoring the educators in the district, and he petitioned the board of education to rename the community center building. They were just lovely educators.”
Prior to being the principal at H.T. Burt, Swanson taught world history, economics, business math and government. One student who had him made enough of an impression to be remembered years later, and be on a first-name basis with him.
“Being a very poor student, I was never on Mr. Harvey’s ‘A’ list in world history in 1964,” said Bob McArthur, life-long Ortonville resident and former Brandon Fire Chief. “There were flying blackboard erasers involved.”
Harvey would retired from the district and become a member of the clergy for the Methodist Church and move from Ortonville over 20 years after having McArthur as a student. One of his hobbies included carving duck decoys, and he used to sell them at Septemberfest.
“Many years later during Septemberfest, I think I was still fire chief at the time so maybe 2004 or 2006, while he was selling his duck carvings, he stopped me,” said McArthur. “And I hoped he really didn’t remember me, but he congratulated me on my family and my place in the community, never one mentioning my school years. From then on, he was just ‘Bob’ so thank you, Bob.”
Harvey was a resident of Ortonville for 36 years before moving to Bay City. He was also a member of the Rotary Club.
For funeral information, see his obituary on page 16 of today’s edition.