By David Fleet
Editor
Goodrich- It was a small black mound on a bright white snow and ice covered lake in rural Livingston County, Mich. 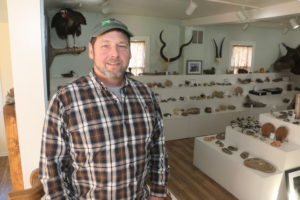 But for 54-year-old Navy veteran Larry Atkins owner of Cosmic Connection Meteorites.com, 8241 S. State Road, the small rock is one more piece of the universe discovered.
Atkins was one of the first to find fragments of a Michigan meteorite that landed near Hamburg Township in January 2018.
“I’m the guy that found it,” laughed Atkins, a meteorite hunter for more than 20 years. “I was on television all over the world.”
Atkins said the Michigan meteorite fell to earth on Jan. 16 while he was Arizona. After hearing the news he flew home to search the area.
“I found it 15 minutes after I arrived,” he said. “We were miles ahead of NASA.”
An active member with the American Meteor Society, Atkins had used Doppler radar to pinpoint the “strewn field,” or path littered by the meteorites that had fell to earth.
“The Doppler showed rocks falling,” he said. “I had the low down—the real skinny and I knew it. This was a very rare find.”
Some of the Hamburg meteorite was donated to NASA for study and a report is due out later this year regarding its composition and origin, he said.
Finding a meteorite is not easy —in 1999 after three years of searching, Atkins made his first discovery at the Gold Basin Area of Mohave County, Az.

Since then he has made hundreds of discoveries and will now share with others through Cosmic Connection, which opened on Dec. 1, 2019.
The local store features Natural History items along with a variety of meteorites. Atkins has a sizable collection—some of which will soon be on loan to Sloan Museum located in Flint. Some of the items include pieces of the moon, petrified wood and other unique collectibles.
“Meteorites allows us to connect mentally with the cosmos and better see our place cosmos,” he said. “It’s about bringing a little bit of the natural world to Goodrich. An opportunity for people to touch the moon, Mars, opening up their minds. I’d like to inspire children to think beyond their normal daily lives. I was a curious kid growing up.”
Atkins said there have been nine areas of Michigan where meteorites have been found, including near Allegan County, Coleman, Grand Rapids, Reed City and the village of Worden in Washtenaw County.
“It’s very rare to find a meteorite in Michigan but you could,” he said. “They do fall all over the world.”