By David Fleet
Editor
Ben Gleason is on the cusp of the NHL.
On Sept. 13, Dallas Stars General Manager Jim Nill announced the signing of defenseman Gleason to a three-year, entry-level contract. Gleason, an Ortonville native who attended Brandon Schools will start the hockey season with the Dallas Stars top affiliate team Texas Stars of the American 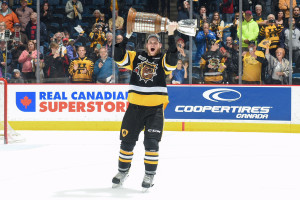 Hockey League. The AHL team plays their home games in Cedar Park, Texas, near Austin.
“The Stars offered me a contract and I signed,” said Gleason, in an interview from Texas. “If I do well with the Texas Stars they’ll call me up. Everyone is fighting for a spot. This has been my goal to play in the NHL. I still have a very lot to learn—the real world of hockey is just starting. This is my job.”
Gleason was one of the players invited to skate in the NHL Prospect Tournament earlier this month in Traverse City.
“The game of hockey has changed over my years,” said Gleason. “I had to learn to play a new style of hockey. The game has turned to speed and less fighting. My goal was to make a living in the NHL and it’s a full time job. My advice to others is just don’t give up. The hockey world is small. My family and friends back home have been so very supportive. Thank you all.”
Gleason was drafted by the London Knights as the 36th draft pick overall in the second round of Ontario Hockey League’s 2014 Priority Selection. The OHL is part of the Canadian Hockey League—a development hockey league with 60 teams in nine Canadian provinces and five American states. Many players move on to the National Hockey League after playing in the OHL.

In late April 2014 Gleason joined the Knights in London, about two hours from Ortonville, where he resided with a billet family while attending the Blyth Academy. He graduated high school this spring. On Oct. 7, 2015 Gleason was acquired and traded to the Hamilton Bulldogs.
On Sept. 24, 2015, Gleason was among 42 of the 2016 NHL draft-eligible players that participated in the 2015 CCM/USA Hockey All-American Prospects game at the First Niagara Centre in Buffalo, NY. Each year the top U.S. players who are eligible for the upcoming NHL entry draft are selected for the competition.
According to USA Hockey, 26 players that participated in the contest last year went on to be chosen in the 2015 NHL entry draft, including seven first-round selections.
In 2014 Gleason, as a Brandon High School sophomore, was considered one of the top defenseman on a U18 Detroit Honeybaked travel team stocked with talent.
Gleason, 20, finished ninth among all OHL defensemen with 48 points including 9 goals and 39 assists in 63 regular-season games with Hamilton in 2017-18. He also ranked eighth among league defensemen with 39 assists in 2017-18, while his six power play goals were good for sixth among OHL defensemen. Gleason registered 18 points including 3 goals and 15 assists in 21 postseason contests, helping Hamilton win the OHL championship. Gleason’s 18 points in the postseason shared first among OHL defensemen and were tied for fifth among all team skaters.