By David Fleet
Editor
Gerald Hughes recognized the roof of his cabin as it was floating down the Tittabawassee River.
“You could just see the roof,” said Hughes, 93, who watched his secondary residence on a YouTube post. “The rest of my cabin was submerged.” 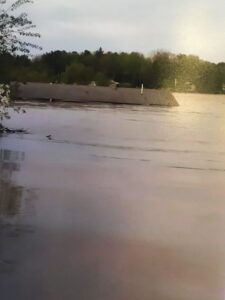 Hughes, a Goodrich resident for 66 years, former Martian football coach and high school math teacher for 33 years lost his Gladwin County cabin of 34 years due to the catastrophic flooding in the area.
The Hughes’ cabin was carried away last month when heavy rains overwhelmed two nearby weakened dams. According to news sources, on May 16, the storm system moved through Michigan, dumping six to eight inches of rain over a 48-hour period in some areas. The Edenville Dam and subsequently the Sanford Dam were breached, forcing more than 10,000 Midland County residents to evacuate their homes due to the imminent danger from this 500-year flood event. Gladwin and Midland counties declared local States of Emergency on May 18, followed by Saginaw and Arenac counties.

The family cabin was located on about 200 foot frontage of the Tobacco River about 300 yards before it joins with the Tittabawassee River just south of Wixom Lake. The structure was a 50 foot trailer with an added pitched roof on a cement slab about four feet over the river level. It had been in the Hughes family since 1986.
“It was quaint little place, that mom and day would spend a lot of time,” said Dan Hughes, son of Gerald. “It was a peaceful setting and a wonderful piece of property on the river.”
The nearby residents were all evacuated just before the flood. However, according to a neighbor who witnessed the flood from a distance when the dam breached, a 36 foot wall of water came through the area and it backed up into the Tobacco River. So powerful was the flood, a neighbor’s stick built home was lifted off its foundation and moved about 40 feet.
“That same wave picked up my dad’s cabin up and took it down the river,” said Dan. “The cabin traveled about one mile, and we think hit some trees, broke into three pieces, then landed on shore.”
The Hughes family contacted the property owners of where their cabin came to rest.
“We recognized some of the items from our cabin,” said Dan. “And, once Consumers Energy gives us the OK we can start cleaning it up. We did find a few dishes and other small items. But, it’s pretty much all gone.”
The family had no idea such a dam breach would ever occur.
“The Edenville Dam had been there since 1925 and you’d never think something this was going to happen,” said Dan. “But, it did. Dad lost everything that was there at our cabin. About 90 percent of his personal property we’ll ever get back. There is no flood insurance and FEMA does not cover it because it’s a flood and secondary residence.”