David Everett Wilder of Ortonville, passed away on August 29, 2022, at the age of 58 after a courageous battle against pancreatic cancer, which ended in a draw. 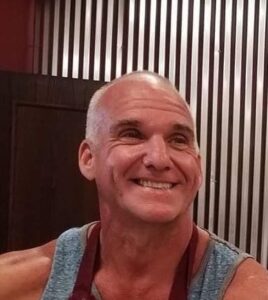 Husband of Tonya; father of Whitney (Vince) Herr and MacKenzie (Mark Hartmann) Wilder; Bapoo of Luke and Rory Herr, and Brax Hartmann; brother of Wesley (Kimberly) Wilder and Kari McAvoy; brother-in-law of Natasha Graves and Michael (Caroline Umhoefer) Aperauch; Son of Everett Wilder and Zela Jane Griffith; preceded in death by his second Father Royce Griffith. He will also be remembered by countless nieces and nephews.  A lifelong hard worker, recently retired from Cassens Transport after 20 years as a Car Hauler. Dave worked tirelessly as a carpenter building countless homes for local families. His final  build was made  to share with his wife and best friend of 35 years. He applied that same work ethic to his passions for woodworking marathon running, recently completing the Disney World Marathon with his daughters. A voracious reader, Dave craved knowledge and even found time to teach himself French.  His family will remember him best for his infectious laugh, even when he laughed at his own jokes. But above all else, Dave is remembered for the love he held for his wife, and for his two daughters, topped only by his love for his grandchildren.  Friends and family are invited to his memorial service on Sunday, September 4, 2022 from 3 to 8 pm at Deer Lake Athletic Club, 6167 White Lake Rd, Clarkston, MI. Please consider making a memorial donation toward the Pancreatic Cancer Action Network (donations can be made at pancan.org). You may also leave a memory or condolence in Dave’s guestbook at www.wintfuneralhome.com