By David Fleet
Editor
On Wednesday, a portion of M-15 was dedicated to honor Deputy Eric Overall who lost his life in the line of duty on Nov. 23, 2017. Beginning at the 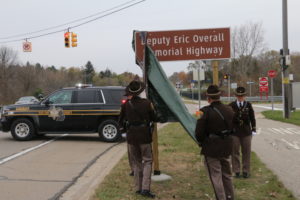 intersection of M-15 and I-75 and extending north through Brandon and Groveland townships along with the Village of Ortonville, the road will now be known as the “Deputy Eric Overall Memorial Highway.”
Former State Representative Jim Tedder introduced legislation in 2018 to memorialize the highway in Overall’s honor. Former Gov. Rick Snyder signed it into law as Public Act 545 of 2018.
Sheriff Michael J. Bouchard, along with members of the Sheriff’s Office Honor Guard, family members of Overall, township officials, gathered at the intersection at M-15 and I-75 to pay tribute to Eric.
“When you lose someone that big and that important it leaves a bigger void,” said Bouchard. “Let this road remind people of the person he was, the dedication he had and the sacrifice he made. These signs will serve as a constant reminder to everyone who passes them to take time to remember Eric’s contribution to not only the Sheriff’s Office, but to his community as a whole. In his own words, we will ‘Never Quit’ honoring his memory.”