Edward W. Filhart, 82, of Shepherd, passed away at Stone Lodge Memory Care in Shepherd on March 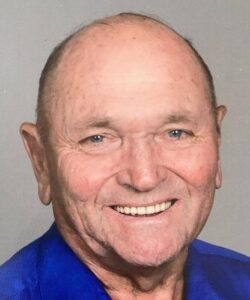 11, 2022. Ed was born in Ortonville, Michigan on February 10, 1940, to Clifford and Wilma (Amstutz) Filhart. He graduated from Ortonville High School in 1958 and proudly served in the United States Marine Corps from 1958-1961. Ed worked for the Oakland County Sheriff’s Department from 1961-1966 and for Consumers Energy from 1966-2002. He was a lifelong farmer who loved his Belgian draft horses and taking his family and friends on hay rides and bob-sled rides. Ed married Mary Taylor on August 7, 1965, at St. Michael Catholic Church in Pontiac, Michigan. He is survived by his wife, Mary, his children Mary Kay (Steve) Yonker, Eddie (Lisa), Dan (Renee), Joe (Lisa), Kathy (Jim) Martinez, Brian (Clarissa), Greg (Anh), Debbie (Brian) Boge, Andy (Gina), Robert, Becky (James) Jones, and Sarah (Corey) Oeschger, twenty-seven grandchildren (with one on the way) and four great-grandchildren (with three on the way), brothers Cliff, Leon, Jim, Don, and Robert, and sister Ann Groeneveld. He is also survived by many brothers and sisters-in-law, nieces, nephews, cousins, and friends. Ed was preceded in death by his parents, brothers Lynn and Jack, father and mother-in-law George and Odeal Taylor, grandson Zachary Martinez, and numerous brothers and sisters-in-law. Visitation for Ed will be at St. Vincent dePaul Church in Shepherd on Monday, March 14 from 2-8 p.m. with a prayer service at 7 p.m. Funeral services for Ed will be at St. Vincent dePaul Church in Shepherd, Michigan on Tuesday, March 15, at 11 a.m. with Father Loren Kalinowski and Deacon Larry Fussman officiating, with burial at St. Vincent dePaul Cemetery, including military honors. The service will be livestreamed on the St. Vincent de Paul Facebook page as well as their YouTube channel. Ed’s family would like to thank Lois Montgomery and her wonderful staff at Stone Lodge for the care they gave him for the past 15 months. Arrangements are being handled by the Berry Funeral Home.