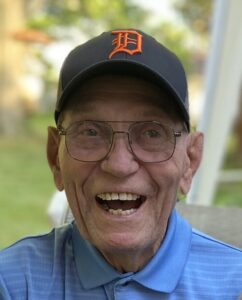 Eldon was born at home on January 23, 1929 in Brown City, Michigan to the late Howard Lee and Jessie (nee Shephard) O’Morrow. He married Maude Lucille Holderbaum on May 22, 1949 in Goodrich, Michigan. Maude preceded him in death on August 26, 1986. Eldon married Jeanette Phylis Pratt on January 4, 1988. Jeanette preceded him in death on July 19, 2000. Eldon is survived by five sons, Donald (Dee- deceased); Edward (Christine); Thomas (Lisa); Michael (Robben); Jonathon (Nora); many grandchildren; many, many great-grandchildren; one brother-in-law, Donald Tucker. Eldon was preceded in death by one daughter, Cynthia (Kenneth) Laury; one son Dennis (Mavis). Anxious to serve his country at the end of WWII, Eldon left High School to join the Navy. Upon returning home, he worked in various capacities in the grocery field, eventually owning his own small market. Eldon finished his working career at General Motors, retiring in 1987. He spent most of his retired years in Florida; finally moving home to Michigan in 2020. Eldon was a member of the Baptist Church of Hadley for many years; and was a founding member of the First Baptist Church of Goodrich. A memorial will be held at the Baptist Church of Hadley November 13, 2021 at 11am.