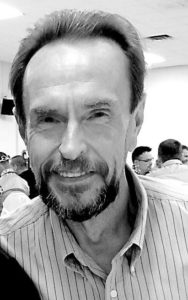 He was one of 108 firefighters including four who died in the line of duty honored during the weekend gathering.
Ramelis, 57, died Jun 28, 2019 following a long battle with liver cancer.
A Detroit native, Ramelis was a 1980 graduate of Bishop Borgess High School. Over the next 35 years he served as a firefighter and EMS throughout Michigan including Newton Township in the Upper Peninsula. He also served two years in Brandon and 13 years for the Groveland Township Fire Department where he was named 2007 Firefighter of the Year.

Former Groveland Fire Chief Steve McGee said Ramelis was diligent and very loyal to the department.
“While serving with Groveland, Paul took the time to attend paramedic school,” recalled McGee. “It helped the community immensely as we were just becoming a paramedic department and really needed his abilities along with experience for advanced life support. We are very grateful for his service and dedication to Groveland.”
In addition, Ramelis worked for the Oakland County Sheriff Office dispatch for about 15 years.
“He had such a distinctive voice when the officers heard him on the dispatch radio,” said Brenda Ramelis, his wife. “The deputies would know they were in good hands when they heard his voice over the air.”
On July 19 a memorial at the Grand Blanc United Methodist Church honored Ramelis.
“Paul wanted to do the job of a firefighter and EMS since he was a child,” she said. “He loved what he was doing and would go out of his way to help others. There’s such a brotherhood among firefighter—they all really depend on each other.”