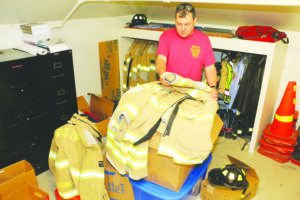 assignment in Guatemala.
On Monday night the township board of trustees voted 5-0 to donate retired bunker gear and some equipment that no longer is considered acceptable by the National Fire Protection Association to Aid for Medicine, Education and Disasters In Central America, USA. The non-profit group collects and ships the gear and equipment for firefighters in Guatemala. In addition, through donations, the group will even ship fire trucks and other emergency equipment.
The National Fire Protection Association requires firefighter gear to be replaced every 10 years no matter the condition, said Ed Klimek, township assistant fire chief.
“Because of this we do not want the liability of donating the gear to departments that have to follow the NFPA standard,” said Klimek. “We have searched for years to find someone suitable that might be able to put the gear to use as most is in great condition. It’s just taking up space.”