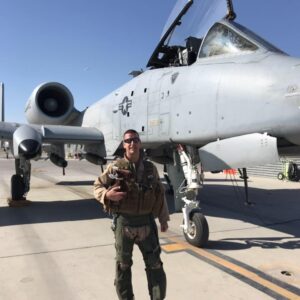 Michigan Air National Guard Lt. Col. Erik “Juice” Simpson, and his A-10 Thunderbolt II “Warthog” will pass over the township at 1,000 foot traveling 350 miles per hour. The Warthog’s home is Selfridge Air National Guard Base, Mt. Clemens.
“Ortonville is one of our 10 flyovers for Memorial Day,” said Simpson, a veteran combat fighter pilot during an interview with The Citizen on Tuesday. “Flyovers have become a tradition and I’ve flown over a packed U of M stadium, Michigan State University stadium and Michigan International Speedway. It’s an honor to serve and remember all veterans across Michigan.”
Simpson, 41, is a 1997 Alpena High School graduate. In 2000 he completed his studies at Embry-Riddle Aeronautical University, in Prescott, Az. He was trained and flew the F-16 Fighting Falcon from 2003-2008. In 2009 he moved to the A10. During his career he completed two combat deployments to Iraq and two in Afghanistan where he flew close air support along with search and rescue operations.
“We fought Isis and the Taliban,” he said. “I’ve been shot at, but not hit.”