Former Blackhawk now on The Guardians of XFL

By David Fleet
Editor
Last Sunday, when the XFL professional football league kicked off their inaugural season, a Brandon Blackhawk was on the field. 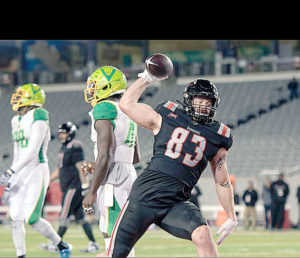 Jake Sutherland, a 2014 Brandon High School graduate plays tight end, and on special teams for the New York Guardians—one of eight teams competing during the new 10 week season. The Guardians defeated the Tampa Bay Vipers 23-3 on Sunday. Sutherland was on the field with the Guardians’ special teams.
“It was just so very intense at the professional level,” said Sutherland, who at 6-feet 5-inches and 255 pounds feels at home in professional football. “The feedback from the XFL fans was very positive.”
Sutherland’s road to professional football started at Brandon where he played on both sides of the ball with 32 receptions for 281 yards and two touchdowns as a junior and 31 tackles and one fumble recovery that same year. Sutherland played in one contest as a senior due to an elbow injury.

The three-sport athlete also competed in Blackhawk basketball and baseball.
Following high school he attended Moorehead State University, and played in 42 career games over four seasons, which included 19 starts, according to MSU. Sutherland tallied 52 catches for 507 yards during his career at MSU. He was also named to the Pioneer Football League Academic Honor Roll.
In 2018 Sutherland earned a Bachelor’s degree in Exercise Science with a minor in Business from MSU.  He was drafted by the Atlanta Legends of the professional American football franchise. The team was one of the eight members of the Alliance of American Football, which played one season from February 2019 to April 2019. Sutherland was then selected by the New York Guardians in the 2019 XFL Draft.
“The game is played at a higher level than college—every player is outstanding and very physical,” said Sutherland, in an interview with The Citizen following Sunday’s game. “The professional  players also have a lot of respect for each other and following a game will shake hands.”
Other teams included in the XFL are Dallas Renegades, Houston Roughnecks, Los Angeles Wildcats, Seattle Dragons, DC Defenders, St. Louis Battlehawks and Tampa Bay Vipers.
The New York Guardians play their home games at Met Life Stadium and are coached by former New York Giants offense coordinator Kevin Gilbride.
At 2 p.m., Feb. 15 the Guardians take on the D.C.Defenders on ABC.
Jake is the son of Barb and Bob Sutherland of Ortonville.