By David Fleet
Editor
Later this spring a former Brandon Blackhawk baseball player will move one step closer to the major leagues. 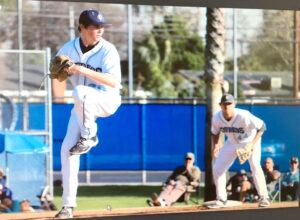 Spencer Hereferd, a 2015 Brandon graduate recently signed his first professional baseball contract for the 2021 season with the New Jersey Jackals, of the Frontier League. The league’s opening day is May 27, 2021 and includes the cities of Evansville, In., Florence, Ky., Sauget, Ill., Joliet, Ill., Lake Erie, Avon, Ohio, New Jersey, Montclair, NJ, New York, Ottawa, Quebec, Schaumburg, Ill., Marion, Ill., Troy, Sussex, NY., Trois-Rivières, QC, Washington, Penn. and Crestwood, Ill.
“The attitude is the glass is half-full,” said Hereferd, 23. “Someone has to be a professional baseball player, why can’t it be me? I do believe with my work ethic and my abilities that a MLB contract is possible now. Half the battle is believing in yourself.”
Hereferd played varsity baseball three years at Brandon High School as a pitcher, catcher and outfielder. He is still affectionately referred to as “Fencer” after attempting to make a catch behind the plate by running into the fence with his face just days before prom.
“The ball was foul by about 30 feet,” laughed Hereferd, 6-foot-4, 165-pound lanky right-handed pitcher.
After graduation from Brandon, he went on to attend and play baseball on athletic scholarships for pitching at Cypress Junior College in California from 2015-17 and Division II California State Dominguez Hills 2017-19. Spencer graduated from Cal State in 2019 with a bachelor of science in public administration.
Hereferd, a middle reliever during his college years, earned the nickname, “el caballo blanco,” or the White Horse. During his time at Cal State he developed a 94 mph fastball, curveball, slider and a change up. During the 2019 season, Hereford pitched 49 innings, with an ERA 3.99, giving up 19 walks and 36 strikeouts.
After college, he played in the Empire Professional Baseball League in Puertio Rico and New York where he had five complete games and 40 strikeouts during the summer of 2019.
Despite setbacks with COVID closures, Hereferd has been training at Beimel Elite Athletics, a professional baseball facility, in Los Angeles. Earlier this year during a 10 day spring training event in Boca Raton, Fla. he impressed scouts from the Frontier League with a complete game and nine strikeouts.
Hereferd said he left Michigan to play baseball in California, Florida and Puertio Rico for the warmer weather.
“I was tired of dealing with cold weather, it’s not baseball weather,” he said. “I wanted to play baseball year-round.”
“Right now it’s a matter of consistency and letting people know who you are in the baseball world,” he said. “Someday I’d like to return to Michigan and be a Detroit Tiger.”
Spencer is the son of Tom and Lauri and three brothers, Tyler, Ian and Nolan.