By David Fleet
Editor
A high school senior recently hit the target on her capstone project. 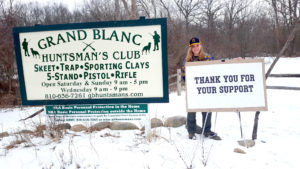 On March 2, Goodrich High School Senior Megan Dzbanski coordinated the Best of Liberty Funshoot at the Grand Blanc Huntsmen’s Club. Participants shot skeet, sporting clays or both and were provided lunch. Dzbanski collected 42 local sponsors, 80 shooting participants who shot 97 rounds of skeet and 58 rounds of sporting clays.
When the smoke cleared the day long event raised $5,101 for the Wounded Warrior Project, a nonprofit group that provides support for veterans that often face significant challenges when they return to civilian life. The WWP is able to provide support during their recovery, wherever they are in that process.

“I’m passionate about giving back to our nation’s service members – the few who fight to protect the freedom of this great country,” said Dzbanski, 18, with a military family that includes a Navy captain and a Marine two star general. “My original goal for the shoot was $1,000—that was exceeded thanks to the support of the community along with the board of directors at the Grand Blanc Huntsman’s Club. Everyone came together for our veterans.”
Since 2013, GHS seniors like Dzbanski, are challenged by a final school project that any student enrolled in a high school English class must complete to graduate. The project allows students to apply all they learn to a meaningful project.
Dzbanski has been a member of the Goodrich middle and high school skeet teams. This fall she plans on attending the University of Michigan-Flint to study naval architecture and marine engineering. While attending college she will join the United States Coast Guard pre-commissioning scholarship program.
Megan is the daughter of Patti and John Dzbanski.