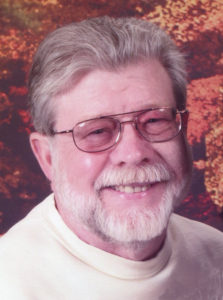 Born in Giles County, Tennessee on November 9, 1947 to the late Garland D. and Florine (nee: Kelley) Fitzpatrick.  He married Carol Luna on January 28, 1978 in Keego Harbor, Michigan.  He is survived by his loving wife Carol Fitzpatrick; two sons, Dennis Fitzpatrick and David Fitzpatrick; four grandchildren, Kelley, David, Bailey and Erin Fitzpatrick; he was preceded in death by his step-father, Eugene Culps; he is also survived by his beloved Boston Terrier, Milo.   Garland was self-employed owning and operating Fitzpatrick Auto Body.  Fitz as he was known by many was a guru of the 1969 Camaro and enjoyed drag racing.  He enjoyed country music with a special affection for Hank Williams, Merle Haggard, Willie Nelson, Wayland Jennings, Toby Keith and 60’s Pop artist, Clarence Frogman Henry.  He enjoyed watching sunrises and sunsets, along with the moon and stars.  He was an avid Eastern Bluebird enthusiast who built  and installed many nest boxes all over Oakland County.  Graveside service will be private at Oxford Cemetery. Arrangements were entrusted to Village Funeral Home, Ortonville. Family has suggested memorial contributions be made to Michigan Humane Society. To send a condolence to the family, go to www.villagefh.com