Gaylord tornado:‘There were pieces of homes in trees’

By David Fleet
Editor
Gaylord — At about 3:45 p.m., May 20, David Kesselring, a former Ortonville resident and employee of 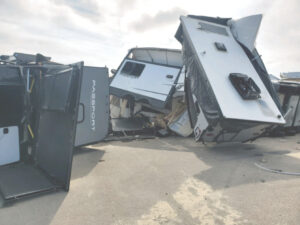 Northern Michigan RV, 277 Expressway Court, Gaylord was just getting off work for the day.
“I could see the tornado forming in the west,” said David, who was in his apartment. “The cloud came down then jumped back up and then dipped down on a subdivision nearby. There was debris everywhere, there were pieces of homes in trees. It did not seem to make any noise and moved so fast.”
According to the National Weather Service, the EF3 tornado Kesselring saw packed 150 mph winds and touched down about six miles south of Elmira in Antrim County, then strengthened as it crossed Gaylord in Otsego County before lifting about one mile northeast of Sparr. The tornado traveled for 16.6 miles for 20 minutes, from 3:35 to 3:55 p.m.
David’s brother Tony Kesselring, is a Gaylord resident and owner of Northern Michigan RV. The business was in the path of the storm.
“I received the tornado warning notification on my phone,” said David. “About three minutes later the tornado was on top of us. Not a lot of time to get ready.”
David recalls the roof flying off a nearby building as about 20 employees along with many customers took cover.
“About 22 people hid inside the bathroom of our building,” he said. “Some were under their desks. The tornado went right through my lot where we had 110 RVs and piled-up 90 campers.”
Once the storm passed, David along with others counted the cars in the parking lot and began to search through the RV wreckage. The RV lot was especially busy since many people were preparing for the Memorial Day weekend.
“It took awhile to make sure all were accounted for,” he said. “It’s not uncommon for customers to be inside the RVs somewhere in the lot. All were safe, just a few minor injuries. The storm threw trailers around like Tinkertoys.”
The business was closed for a week until power could be restored.
The Michigan State Police reported two confirmed deaths and at least 44 people hospitalized. The Nottingham Forest Mobile Home Park was hit hard. An estimated 70 homes there and 95 percent were damaged.