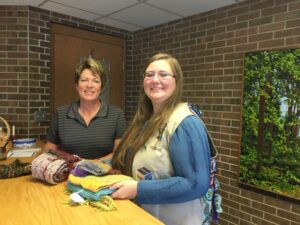 “I’ve been knitting and crocheting since I was eight years old,” said Aalertsberg, 18. “As I was growing up I noticed not many people in my age group knew how to do that, so I started a club at my high school to teach people the basics.”
A minimum of 80 hours is suggested to complete the steps to earn the Girl Scout Gold Award, which is earned by fewer than 6 percent of Girl Scouts annually. Each Gold Award Girl Scout spends 1 – 2 years on her project. Approximately one million Girl Scouts have earned the Gold Award or its equivalent since 1916.

At the end of Aalertsberg’s senior year in 2019, she and the over 25 people in the club she started donated a bunch of scarves to the clothing closet at Lapeer High School and to the clothing closet at the Goodrich United Methodist Church.
“I learned a lot of leadership skills and how to speak for myself,” she said. “And just talking with other people about how I could donate, I learned a lot of business management, which will help me in the future.”
Aalertsberg is a 2019 graduate of Lapeer High School, where she participated in the early college program and earned over 70 college credits. She plans to earn her cosmetology license, and get associate degrees in salon management and general studies through Mott Community College.