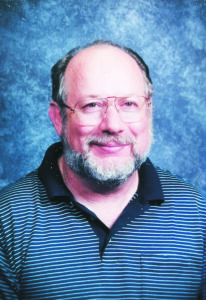 But his focus remained steady on the Goodrich community, youth and family.
Doug passed away on Sept. 2. He was 74.
Natives of Kings Mountain, North Carolina, the McAbee family arrived in Flint on June 7, 1953, after Doug’s father started a new job at Buick.
“The next day the family went for a drive to explore the city and it began to rain,” said Laurie McAbee.
“So they returned home to make sure the windows were closed.”
Within minutes of turning back home the Beecher Tornado arrived with winds near 200 mph, killing 116 residents swept across their path.
“The family missed the tornado by just minutes,” said Laurie.
After a few months in Flint, the family moved to the Grand Blanc area.
Doug graduated Goodrich High School in 1965, and following jobs at Hempton’s Body Shop, Pontiac Motors and UM-Flint, he was a Goodrich Bus Driver and eventually custodian in the early 1990s, retiring in 2011.
“At that time when students got detention, part of their duty was to help the custodian clean the school,” said Laurie. “The kids were always asking for Mr. McAbee during detention because he treated them with kindness, respect and as people. Several students would stop back and stay in contact with Doug after they graduated.”
Doug’s commitment toward area youth was also reflected in helping found the Goodrich Boy Scout Troop 340 in 1993.
“Doug’s sons Patrick and Josh were getting to the age of transferring up to Boy Scouts from Cub,” recalled Laurie. “But there were no troops in Goodrich. The council wanted a presence and now that Troop is now 30 years old.”
Doug would show the scouts tricks not found in the manual, she said.
“He could cook an egg on a stick or start a fire with steel wool,” she said. “He was also a supporter of adult members of the Girl Scouts, he was always recruiting girls of all ages for scouts. Goodrich Troop 31 has been in the area since 1950.”
Doug served on the Goodrich Planning commission after he retired from the schools and eight years on the village council, including president.
“He was always looking for something to benefit the community,” she said. “Seeking the needs of Goodrich, like the Common’s Park to make it better for families.”
While Doug’s commitment to Goodrich was evident from his action on village council, his passion for other hobbies including Volkswagen buses.
“The most he ever had was 13,” said Laurie. “His collection of bugs and vans were also named.”
Doug also was a Ham radio operator and long time member of the Genesee County Radio Club. In addition, Doug learned photography in the 1960s, inspired by then Ortonville resident Lee McArthur.
“Doug started all his kids in photography,” she said. “He donated cameras to Goodrich High School to take photos for the year book.”
For the past 12 years, following Doug’s retirement,
“There are a lot of new people coming to Goodrich, Doug wanted to share the history of the community,” she said. “He was the conscience of Goodrich, and lived by the rules.”