By Shelby Stewart
Staff Writer
Local businessman Nick Patel’s reaction to the recent ban on flavored e-cigarettes is mixed.
“One way it’s (the ban) good, one way it’s bad,” said Nick Patel, owner of Smoker’s Palace and the Marathon Gas station both located on M-15. “It 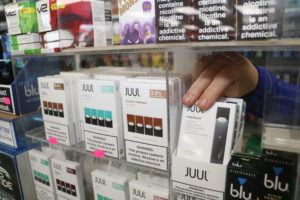 affects business a lot, one of the categories of product is gone. So people only have a choice of cigarettes or tobacco. Some customers are already complaining.”

On Sept 4, Michigan became the first state with a ban on sales of flavored e-cigarettes. Governor Gretchen Whitmer directed the state department of health to issue emergency rules to ban the sale of vaping products containing nicotine in stores and online. The ban will also restrict marketing, stating that companies cannot advertise vaping products as clean, safe, or healthy or any other advertising that may give the impression that the product is harmless.
Patel said some adults who use the products don’t like the ban, as the products are legal for those over 18 years of age according to regulations from the FDA.
“They have to try like Ohio or Indiana for the flavored e-cigarettes,” he said. “Obviously, we don’t want kids using them. With our new computer system we have to ask for ID. That’s our goal, for teens to not use them.”
The ban is part of an effort to combat the vaping epidemic among teens and young adults, which has been a national battle as well. Most recently, federal health officials have been investigating 450 lung illness cases possibly linked to vaping, including five deaths. The Food and Drug Administration (FDA) has also issued a warning letter to Juul, an e-cigarette manufacturer that accounts for over 70 percent of the e-cigarette market, accusing the company of advertising the vaping products as a safer alternative to cigarettes without scientific evidence or approval to support the claims.
Manufacturers and government officials alike have been working to combat e-cigarette use in teens, and most recently Juul has started a tracking program that can trace a confiscated product’s serial number to a point of sale, and there is a place on their website for teachers, parents and law enforcement to report a confiscated product’s serial number to the company. They will then start an investigation into the product and the seller or the person who may have supplied it to the minor.
About 37 percent of high school seniors reported vaping according to a survey done by the National Institute on Drug Abuse, up 10 percent from 2017. At Brandon schools, it is against school policy to even have any of the products on school grounds.
“Brandon supports any efforts to keep vapes away from Michigan’s youth,” said Brandon superintendent Dr. Matt Outlaw. “There are serious health issues associated with vaping and some of the marketing is clearly targeting our youth. As a district, we will continue to focus our efforts on awareness for our students but we appreciate the efforts by our lawmakers as well.”

While the FDA is warning both the general public about vaping as well as manufacturers what is harmful to the public, they fall under the same category as other tobacco products as far as regulation.
“This epidemic of youth vaping is greatly disturbing for both the physical and emotional health of American youth,” said Brandon Groveland Youth Assistance caseworker Ragen Rockwell. “It is imperative that we place the well-being of our youth over capitalism.”
While the ban is statewide, there is also a local ordinance that follows state law that says minors cannot be in possession of the products, which allows Brandon deputies to write a ticket for a civil infraction on the first offence.
“I think the ban is a good thing, in fact I think it’s great, actually,” said Lt. Greg Glover, Oakland County Sheriff’s Office Brandon substation commander. “They (the companies) seem to cater to young adults and high school age, and they think it’s cool. They’re violating school rules daily, openly in class, and those kids are not sure sure what they are putting in their bodies.”
According to one manufacturer, the product is a mixture of water, food grade flavoring, a choice of nicotine levels or zero nicotine, and propylene glycol or vegetable glycerin.
“As a parent, if your kid is driving, and you see a foggy, tacky substance on their windows, that’s from vaping,” said Glover. “It’s very hard to get off, you almost need rubbing alcohol to get it off. I am all for any vaping ordinances or laws that come down to protect our school-age kids.”
Glover also thinks the ban will keep a good portion of kids from vaping or from obtaining the products.
“I think it’ll be less attractive to them,” he said. “If you don’t make it a convenience for them. People talk about the black market being higher, but I just don’t think kids will be doing that. Most stores in our area have done a good job of not selling to minors, but, just like cigarettes, if they want them bad enough, they’ll get them. They think it looks cool, and they don’t know the effects. Those things have higher nicotine content than cigarettes.”
And with the ban in place, businesses have 30 days from the time of the ban to comply, otherwise they would be in violation.
“If we find out that we have businesses that sell it, we will deal with it,” said Glover.