By Shelby Stewart
Staff Writer
Henry Ford is known for his innovation and design of his cars, but he couldn’t do it alone. 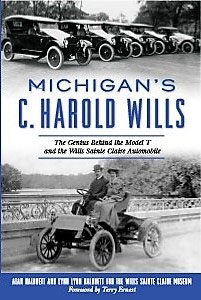 At 7 p.m., Nov. 12 the Brandon Township Public Library will host Alan Naldrett, an author who wrote a biography of C. Harold Wills, who was Henry Ford’s right-hand man for years, almost from the start.
“Wills was with Ford almost from the beginning and designed his Model A through T,” said Naldrett. “The planetary transmission he developed for the Model T was revolutionary and much-copied in it’s day. He invented other major auto improvements and even designed the famous Ford logo still used today.”
The presentation will cover the life of Wills, who Ford considered so valuable, he paid him a million dollars a year around 1910, which translates to over $25 million today. This wouldn’t be Wills’ only major accomplishment in life, however.
“When Ford didn’t want to make changes to the Model T, Wills grew tired of not having much to do so he quit and formed his own auto company in Marysville, Michigan, building the highly-regarded Wills Sainte Claire automobile,” said Naldrett. “While developing the auto, he also developed Marysville, modernizing the small town with infrastructure including electricity, streets and street lights, sidewalks, worker’s housing and more.”
The factory in Marysville produced over 14,000 of the Wills Sainte Claire automobile in 1921-1926.
“In the year 2002, volunteers opened the Wills Sainte Claire Museum in Marysville, honoring Wills and his creations,” said Naldrett. “This put C.H. Wills in the position of having a museum dedicated to him, but as of yet no official biography. We changed that in 2017 when we released the bio on Michigan’s C. Harold Wills.”
Learn all about Wills and Naldrett’s book on Nov. 12 at 7 p.m. at the Brandon Township Public Library, 304 South St., Ortonville. Register online at brandonlibrary.org or by calling 248-627-1460