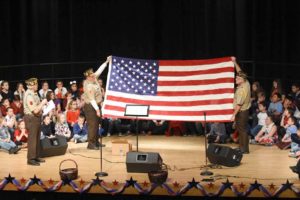 582.
The event, attended by more than 30 area veterans included music by the Harvey Swanson fourth and fifth grade choirs under the direction of Emily Ketchum, American flag folding protocol and salutes to the armed services. The event also honored Harvey Swanson fourth grade teacher Shannon Voyer, who received the VFW Crystal Apple award for her efforts to promote patriotism in the school district.
Dennis Hoffman, VFW 582 Post command said the outpouring of support for veterans from the schools along with the community was overwhelming.

“Monday’s event which included thank you cards, music and the volunteering efforts of many teachers plus the crowds that attended truly reflected the gratitude of our community,” said Hoffman.
During the concert, the school choirs performed the “Salute to the Services,” performing the official song for each of the five branches of the US Armed Forces. Veteran’s in attendance stood up for that branch of service where students handed out cards they made to the veterans thanking them for their service.